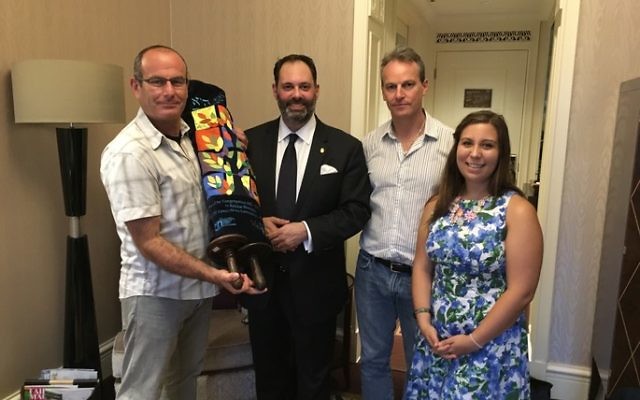 FOR Philip Dalidakis, a work trip to Shanghai this year proved to be much more, as he delivered a special Sefer Torah (Torah scroll). It was a journey woven into the Victorian government minister’s family history, which, like the scroll’s, spans several continents.

In 1939, the Torah scroll was smuggled out of Germany to Brazil by a German family fleeing the Nazis. At the Associação Religiosa Israelita (ARI), the Reform synagogue movement in Rio de Janeiro, it would become a treasured artefact.

Eight decades later, a decision was made to donate the scroll under a sharing program by the World Union for Progressive Judaism. To honour Josef Aronsohn – who had found shelter in Shanghai before moving to Brazil, where he had become one of ARI’s founders – the Brazilian shule chose Kehilat Shanghai, a Progressive congregation in the city of Aronsohn’s wartime refuge, to receive its scroll.

Kehilat Shanghai congregant Jeanine Buzali brought the scroll to China in 2015 and it was used in Rosh Hashanah services at Ohel Moshe, a World War II-era synagogue now housing the Shanghai Jewish Refugees Museum. But the fragile parchment was more than 100 years old and in need of repair by a sofer stam (Torah scribe and repairer).

At Kehilat Shanghai last year, young Jamin Nuland, a bar mitzvah, heard about it and decided to donate his gift money to pay for the repairs. Jamin’s father Drew Nuland searched for a sofer stam, locating Rabbi Eli Gutnick in Melbourne, and the scroll was painstakingly packed and delivered to Australia.

“The work took a few months and when the Torah scroll was ready, it was a challenge how to bring it back to China,” said Kehilat Shanghai’s former president Arie Schreier.

Enter Dvir Bar-Gal, an Israeli who has been conducting guided tours of Shanghai’s historic Hongkou Ghetto, where some 18,000 European Jewish refugees survived in Japanese-occupied Shanghai while their world back home burned to oblivion. Bar-Gal, who arrived in Shanghai in 2001, has been conducting the tours for years, leading groups, mainly survivors and their children and grandchildren from North America and Australia, through Hongkou, a working class neighbourhood of Shanghai that had offered respite to Jews escaping the Holocaust. Over the years, Bar-Gal had become friendly with many families from Australia on his tours, and one of these was the Dalidakis family of Melbourne.

Noemi Dalidakis and her younger sister Dagmar Strauss Yaari were both born in Shanghai. Their parents, Gottfried and Irene Strauss, fled Germany for China in 1939 after Gottfried had spent nearly four years in concentration camps and a prison. In 1946, with the war over, and their plans to settle with Gottfried’s US relatives stalling in the US immigration bureaucracy, the Strausses, responding to Irene’s cousin in Victoria who saw their names on a Red Cross document, opted for Australia.

The Strausses settled in Melbourne and began to reassemble their broken lives. “In no other place in the world have I seen such a lot of green parks,” Irene wrote admiringly after arriving in Melbourne.

Noemi and Dagmar grew up and went to school here. Dagmar worked as an ABC producer and presenter, before going on to make aliyah. Noemi and her Greek-born husband George Dalidakis raised their children Marina and Philip here.

In 1997, Noemi helped collect memorabilia from former Shanghai refugees in Melbourne for a landmark exhibition at the Jewish Museum of Australia.

“I’ve been back to Shanghai four times and am going back again next year with my daughter who lives in the US. I always feel very welcome in Shanghai,” she said.

When Philip Dalidakis fulfilled his own and his family’s dreams by becoming a successful professional – first in finance and in 2014 as a member of the Victorian Parliament, later a minister in the Andrews government – the Strausses’ decision to settle in Australia seemed vindicated. Poignantly, Dalidakis took his oath of office on a Torah scroll that had belonged to his grandfather Gottfried.

In April this year, Dalidakis, who has been Victoria’s Trade and Investment Minister since 2015, joined his mother Noemi for a heritage journey to Shanghai, taking Bar-Gal’s iconic Hongkou tour through the old neighbourhood.

When Drew Nuland enquired about a way to bring the repaired Rio scroll from Melbourne to Shanghai, Bar-Gal could think of no better courier than the Victorian government minister. Dalidakis accepted the honour, and in May this year, in what Arie Schreier described as “a small, emotional ceremony”, Dalidakis, a member of Melbourne Progressive synagogue Temple Beth Israel (TBI), presented it to Kehilat Shanghai, a sister congregation of TBI.

And he met with Drew Nuland, father of Jamin, the Shanghai teenager whose bar mitzvah money had made the repairs possible. Fittingly, the Torah was returned two days before Shavuot, the festival celebrating the giving of the Torah.

Dalidakis’ family history has informed his views about perilous arrivals on distant shores. “I’m very unpopular with my federal Labor colleagues because I remain an outspoken critic of the government’s and the opposition’s policies in relation to refugees,” he told The AJN.

But for Kehilat Shanghai, a Sefer Torah was rejuvenated, just as Jewish life in Shanghai has found its renaissance in vibrant Reform and Chabad communities, and a journey of survival for the Strauss and Dalidakis families has come full circle.