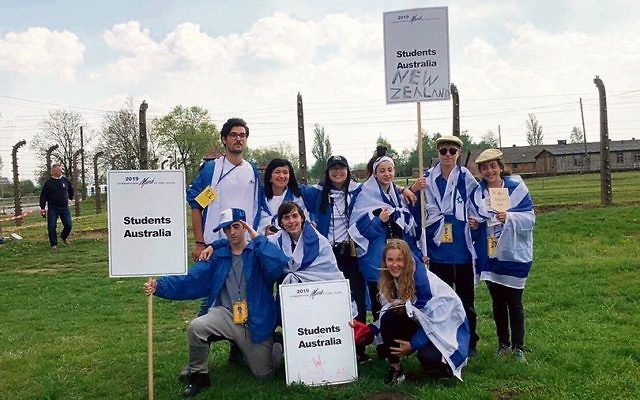 EACH year more than 10,000 people from around the world descend on Auschwitz to take part in March of the Living (MOTL). Coinciding with Yom Hashoah last week, together they took the three-kilometre walk to Birkenau – a silent tribute to all victims of the Holocaust.

2019 was a particularly memorable year for the Australian contingent – with 72 adults, the largest ever adult cohort participating in MOTL; and a student contingent of seven teens from Melbourne, Sydney and New Zealand.

One of those participants was 90-year old Jack Meister, a survivor from Sydney, who said Kaddish with 5 other survivors on stage at a ceremony in Birkenau.

“It gave me the opportunity to finally get closure for the members of my family who were murdered and taken from me at the age of 10,” Meister told The AJN from Poland.

“It has been an amazing journey. Seeing the young people taking this message forward really gives me hope.”

MOTL Australia president Cedric Gefen added that seeing Jack engage in an impromptu discussion with two survivors from Canada about their Shoah experiences in the dining room of their hotel was a particularly special moment.

This is the seventh time that Gefen has led MOTL, but he has been involved for 19 years.

“It’s the joy I get from engaging with the participants, seeing how the program touches and engages them. It’s the discussions, the interactions, the warmth, the chavershaft, the learning from each other. I learn and gain knowledge and experience from every year,” he said.

This year’s march was dedicated to the memory of Greek Jewry. In a show of solidarity, Bartholomew I of Constantinople the spiritual leader of the Eastern Orthodox Christian church and Israeli singer Yehuda Poliker, whose parents are Greek survivors joined in the walk.

A group of United Nations ambassadors also participated in the march, led by ex-Sydneysider Dr Sharon Kangisser Cohen. The group comprised representatives from various communities including Latvia, Lithuania, Guatemala, Honduras, Kenya and Nicaragua; and US ambassador to Israel David Friedman.

Kangisser believes that the visit to Auschwitz I and Birkenau “made the most profound impression” on the group.

“Many expressed that they had not expected to see what they did in terms of the cruelty of the regime and the suffering of the victims,” she added.

The Australian group has now left Poland for Israel to join in Yom Ha’atzmaut celebrations.

Watch the march at motl.com.au/Watch-Live!.aspx.