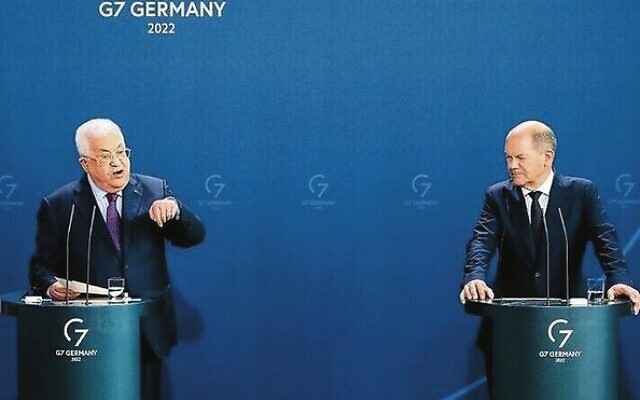 PALESTINIAN Authority President Mahmoud Abbas caused shock in Germany on Tuesday when, standing beside German Chancellor Olaf Scholz in Berlin, he accused Israel of committing “holocausts” against Palestinians over the years.

Scholz did not react verbally to Abbas’s comment in the moment, though he grimaced at the use of the word, which Abbas uttered in English. Scholz later said the use of the term in such a context was “unbearable”.

“Mahmoud Abbas accusing Israel of having committed ’50 Holocausts’ while standing on German soil is not only a moral disgrace but a monstrous lie,” Lapid said.

Abbas made his remarks when the two spoke to the media after holding a meeting on Middle East issues.

Abbas was responding to a reporter’s question about the upcoming anniversary of the Munich massacre half a century ago. Eleven Israeli athletes and a German police officer died after members of the Palestinian militant group Black September took hostages at the Olympic Village on September 5, 1972. At the time of the attack, the group was linked to Abbas’s Fatah party.

Asked whether as Palestinian leader he planned to apologise to Israel and Germany for the attack ahead of the 50th anniversary, Abbas responded instead by citing allegations of atrocities committed by Israel since 1947.

“If we want to go over the past, go ahead,” Abbas, who was speaking Arabic, told the reporters.

“I have 50 slaughters that Israel committed … 50 massacres, 50 slaughters, 50 holocausts,” he said, taking care to pronounce the final word in English.

While Scholz scowled at the use of the word but did not say anything at the time, he has since released a statement, saying “I am disgusted by the outrageous remarks made by Palestinian President Mahmoud Abbas. For us Germans in particular, any relativisation of the singularity of the Holocaust is intolerable and unacceptable. I condemn any attempt to deny the crimes of the Holocaust”.

Germany’s popular BILD newspaper published an outraged website-leading story about the incident, under the title “Antisemitism scandal at the federal chancellery”.

It expressed shock that “not a word of dissent [was said] in the face of the worst Holocaust relativisation that a head of government has ever uttered in the Chancellor’s office.”

Weeks before a planned sombre commemoration marking the 50th anniversary of the Munich attack, Germany has also found itself embroiled in controversy in its dealings with the relatives of the Israelis who were killed.

Victims’ families announced last week that they planned to boycott the ceremony after failing to reach an agreement on bigger compensation from the German government.

Relatives of the athletes have long accused Germany of having failed to secure the Olympic Village, refusing Israeli help and botching a rescue operation in which five of the attackers also died.