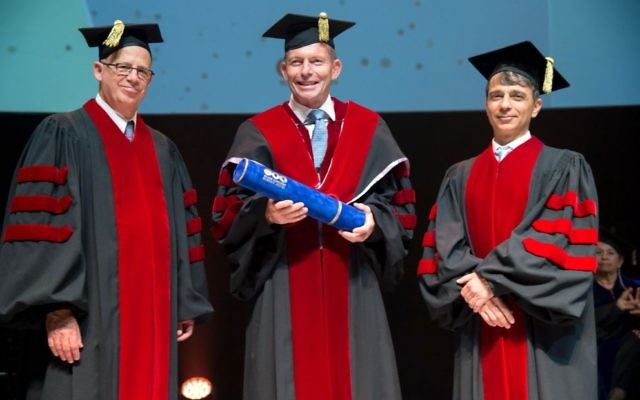 FORMER Australian prime minister Tony Abbott told The AJN that support for Israel is a “no brainer”.

Abbott, who spoke to the paper after he received an honorary doctorate from Tel Aviv University last week, said that Israel has a right to exist behind secure borders.

“I think it’s a no brainer for any Australian politicians considering things from an Australian national interest,” he said.

The former Liberal leader, who is still a member of Federal Parliament, said that “it’s always good to visit Israel” because he is warmly received.

“The people of Israel and the Jewish community more broadly are very grateful for public support and I’ve always been very happy to give it.

“I think, for Australia, a country like Israel is really family given the great bonds between many Australians and many Israelis.”

On the doctorate itself, Abbott said it was “very gratifying”.

“It’s nice to be acknowledged.”

Tel Aviv University noted that Abbott actively worked to bridge health and socioeconomic gaps among Australia’s Indigenous population, volunteers his time as a lifeguard and firefighter and has been a longstanding proponent of warm Australia–Israel ties.

Abbott was in Israel at the same time as former Australian prime minister Julia Gillard, who was honoured by Ben-Gurion University.

“Good on Ben-Gurion University for honouring Julia Gillard,” he said.

“I think that by contemporary Labor standards, she has been a very good friend of Israel, so why not acknowledge her in this way?”

In a lighter moment during his trip, Abbott stopped for a falafel with Australia’s ambassador to Israel Dave Sharma.

“It was a beauty,” Abbott said of the meal in the Old City of Jerusalem.

“We had freshly squeezed orange juice and that was lovely as well.”