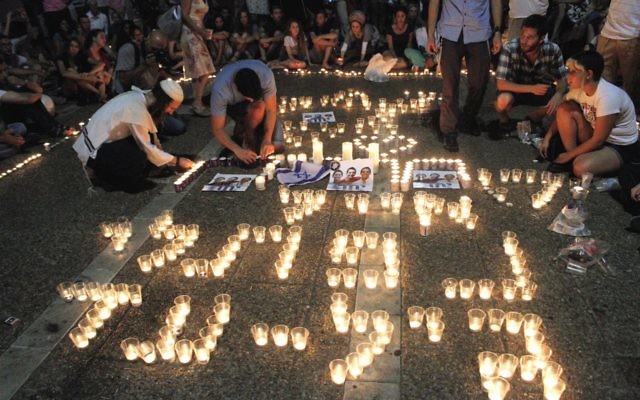 PRIME Minister Tony Abbott has written personally to Israeli Prime Minister Benjamin Netanyahu to express Australia’s sympathy and sorrow in the wake of the brutal slayings of the three Israeli teens abducted last month near Hebron.

The bodies of the students were discovered on Monday night in a field near Hebron, almost three weeks after they were kidnapped while heading home from school.

In his letter to Netanyahu, Abbott wrote, “Dear Bibi, On behalf of the Australian government and people, I write to extend my condolences on the deaths of Eyal Yifrah, Gilad Shaar and Naftali Frenkel. The abduction and murder of these three innocent teenagers was a shameful act and one that we condemn, as we do all acts of terrorism. I hope the perpetrators are found soon and brought to justice.

“The thoughts and prayers of all Australians are with the families and loved ones of the three students at this difficult time.”

The PM’s condemnation headed a wave of support from Australian leaders on different sides of politics and from Jewish community leaders.

Foreign Minister Julie Bishop also expressed her condolences to the families of the three youths, adding: “We condemn all acts of violence, especially where it affects innocent civilians. The Palestinian Authority must make every effort to apprehend those responsible for these crimes. I call on both sides to refrain from any escalation of violence that would only serve to make the resolution of differences between Israel and Palestinians more difficult.”

ALP leader Bill Shorten described the murders as “an unspeakable tragedy”, adding: “My thoughts and prayers are with the families and loved ones of these three young men, and also with the entire Jewish community at this incredibly difficult time.”

Melbourne Ports Federal MP Michael Danby, who tabled a petition in Parliament for the abducted teens, said their murders “sent shockwaves throughout the Australian Jewish community”.

Noting that “since 2003, Hamas has been proscribed as a terrorist organisation by Australian governments of all persuasions,” he said the killings “should be enough of a catalyst for [Palestinian Authority chairman Mahmoud] Abbas to end his unity government with [Hamas]”.

Caulfield MP David Southwick said: “The threat and absolute inhumanity displayed towards Jews living in Israel and indifference for life cannot be tolerated. This terrible loss yet again demonstrates to the world that Israel is the only nation sincerely wanting a path to peace in the Middle East.”

Jewish communal leaders also expressed their outrage. Executive Council of Australian Jewry president Robert Goot said: “We express our profound condolences to the families and to the President and the people of Israel. Although no-one has yet admitted responsibility for this heinous crime, Hamas and other Islamist groups make no secret of their true goal, which is to subject Israel’s majority Jewish population to  murder and forcible expulsions.”

Zionist Federation of Australia (ZFA) president Dr Danny Lamm said: “We were heartbroken and horrified  … The true face of Hamas has yet again been cruelly exposed to the world.”

Australia/Israel & Jewish Affairs Council national chairman Mark Leibler and executive director Colin Rubenstein said: “This attack, and the disturbing level of approval for it in Palestinian society, is a product of the culture of incitement and hatred that has been ingrained in the population through official Palestinian institutions.”

Jewish Community Council of Victoria president Nina Bassat said: “These innocents were kidnapped and murdered only because they were Jewish … Tragedies such as this take us to the edge of despair. But as always, as a community we pray for peace.”

NSW Jewish Board of Deputies president Yair Miller said: “Our hearts break for the families of these three innocent victims and all the citizens of Israel.”

Jewish National Fund of Australia chief executive Dan Springer said his organisation’s thoughts were with the families. “We join them in their mourning and grief, together with all the Jewish people and the civilised world.”

Organisation of Rabbis of Australasia president Rabbi Shlomo Kluwgant said: “We pray that justice finds the perpetrators of these heinous crimes … And to the world, we say: may this atrocity not fall upon deaf ears.”

Union for Progressive Judaism executive director Steve Denenberg offered condolences for “the three latest victims of blind hatred.  We join all those around the world, Jews, Muslims and others, who pray that this ghastly act will not, in turn, start a new wave of violence and hatred.”

New Israel Fund Australia Foundation president Irving Wallach said: “We are devastated to learn of the deaths … And we ask that every leader, Israeli and Palestinian, take every step necessary to maintain calm and prevent more loss of life.”

A memorial is held for the three murdered teenagers.