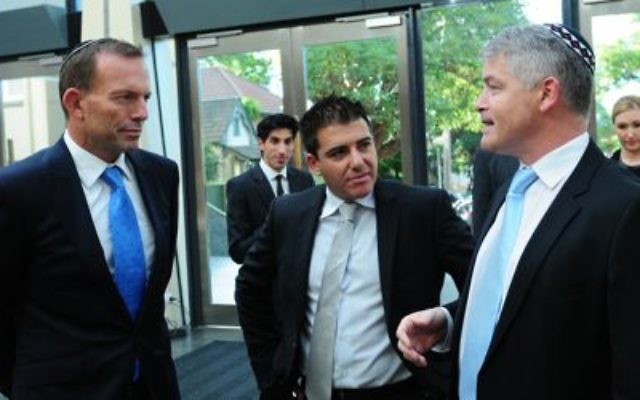 FEDERAL Opposition Leader Tony Abbott gave a strong endorsement of Israel’s right to defend itself during a speech at the Central Synagogue last Friday night.

Appearing as a special guest as part of Central’s ongoing “Studio Central” youth program, Abbott spoke about the contribution Jewish Australians have made to our nation, before noting the similarities between Australia and Israel.

“In so many ways, [Israel is] a country so much like Australia, a liberal, pluralist democracy,” he said, “A beacon of freedom and hope in a part of the world which has so little freedom and hope.”

He added that Australians “can hardly begin to comprehend” the existential threat Israelis live under. “It is so easy for us in Australia to get moral qualms, if you like, when we read about Israeli actions in – on the West Bank for instance – or Israeli involvement in Lebanon.”

“When Israel is fighting for its very life, well, as far as I’m concerned, Australians are Israelis. We are all Israelis in those circumstances.”

On a more local front, Abbott noted that Australia was the only the country in the world after Israel to have had a Jewish head of state, a Jewish Chief Justice and a Jewish Commander of the Armed Forces.

He was also full of praise for the Central Synagogue congregation and the wider Jewish community. “I am immensely encouraged to see the strength and the vigour of Jewish culture and Jewish faith here in Australia.”

“There’s a young community that’s being developed in the Central Synagogue that’s more and more vibrant, and that is growing in numbers,” he said. “We’re appealing to that crowd again so it’s a very positive development and we’re looking forward to many more events.”

Rabbi Levi Wolff expressed his gratitude to Kooyong MP Josh Frydenberg, who was also present, for his role in securing Abbott’s attendance for the event, noting that when the Opposition Leader mentioned there were “three future prime ministers in the room”, it was a testament to Frydenberg’s potential and ability.