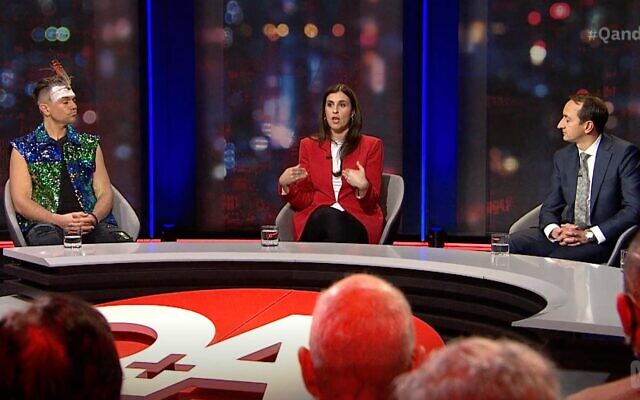 THE ABC’s managing director has reportedly apologised for factual errors in the broadcaster’s coverage of the recent conflict between Israel and Hamas, during a meeting with the Executive Council of Australian Jewry (ECAJ).

The letter accused the national broadcaster of a “pervasive culture of bias, if not antipathy, towards Israel and the mainstream Australian Jewish community”, within the unit responsible for producing the program.

The complaint argued that the episode “featured an outpouring of undiluted and uncontested falsehoods and vitriol from two panellists”, with Liberal MP Dave Sharma acting as “one lone voice, not from the Jewish community, swimming against the tide”, despite many interruptions.

“The selection of questions from the audience and of tweets that were screened was similarly skewed,” it added. Pointing to a pattern of conduct over many years, ECAJ stated that the program “was merely the latest unfortunate example of a long history of exclusion of an authentic Jewish community viewpoint”, noting: “the urgency of our request for a meeting is due to the dramatic upsurge in antisemitic incidents.”

Alhadeff, who recently stepped down as CEO of the NSW Jewish Board of Deputies, told The AJN that during the meeting, Anderson readily acknowledged that the ABC’s coverage of the conflict had contained “many errors” for which he apologised. He also acknowledged the validity of the ECAJ’s earlier detailed critique of an “explainer” document that had been published on the ABC website at the start of hostilities, before being corrected. That matter is still under investigation by the ABC complaints unit.

“Mr Anderson was keen to explore specific constructive steps to prevent a recurrence of the problems we raised and improve the quality of the ABC’s news coverage,” Segal said after the meeting. “Despite the obvious difficulties, we have secured a commitment for follow-up meetings and engagement with both key ABC staff and leadership, and have reason to hope for a productive outcome.”

Meanwhile, the Australia/Israel & Jewish Affairs Council (AIJAC) has lodged an official complaint over the Q&A episode, arguing that the program breached the ABC’s statutory obligations by not balancing the appearance of high-profile pro-Palestinian advocate Randa Abdel-Fattah with an equivalent pro-Israel, Jewish speaker.

According to AIJAC executive director Colin Rubenstein the ABC was “effectively silencing the pro-Israel, Jewish perspective”.

Stressing the complaint did not criticise Abdel-Fattah’s appearance on the panel, he said, “To feature a well-known pro-Palestinian advocate who is of Palestinian descent and not balance her appearance on the panel with a Jewish, pro-Israel representative, is a clear and unacceptable breach of the ABC’s obligations that it be impartial and include a diversity of opinions, especially when focusing on contentious topics.”

AIJAC has requested that ABC Audience and Consumer Affairs publicly state that the program breached its code of conduct obligations and that an editorial note be included on the Q&A webpage where the episode is archived.

The AJN reached out to the ABC for comment but were told the findings of the Audience and Consumer Affairs unit would be made in due course.