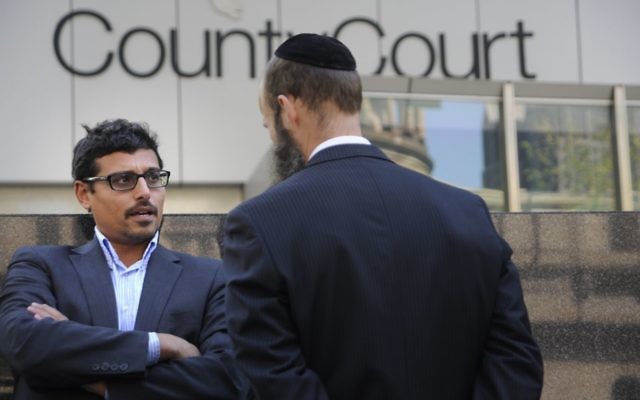 Manny Waks and AVB outside the County Court in Melbourne where the Royal Commission hearings into child sexual abuse were held.

CONVICTED child sexual abuser Daniel “Gug” Hayman reveals that he was sexually abused as a child in a new documentary that will be screened on the ABC on Tuesday night.

Hayman, who speaks publicly for the first time since being convicted of indecent assault of a person under the age of 16 by a person in authority, met with child sexual abuse victim, and victims’ advocate, Manny Waks for the Breaking The Silence documentary.

“I hope and pray, that just like God forgives someone who truly repents and changes his ways, so too the victims can forgive and move on with their lives,” says Hayman, who was convicted of sexually abusing a victim known as AVB.

Director Danny Ben-Moshe told The AJN that he spoke to Hayman for hours on the phone before he agreed to be interviewed.

“Initially he only agreed to go in visually, but not have any audio, to show that he was willing to meet with a victim.

“We then put to him that it was his opportunity to share his words and he agreed to speak on camera.”

In another controversial moment in the documentary, Waks tries to confront one of his alleged abusers, knocking on the door of his residence in New York.

Ben-Moshe recalled it was a tense few hours waiting to see if the alleged perpetrator was home and then confronting the man.

“It wasn’t something that we did lightly,” Ben-Moshe said. “We thought through all of the potential scenarios that might happen, including a shouting match, the potential for violence or maybe the man coming out and apologising, which would have been a wonderful climax for the film.”

Breaking The Silence is the second of two documentaries directed by Ben-Moshe and produced by former AJN editor Dan Goldberg that look at historical allegation of child sexual abuse at the Yeshivah Centre in Melbourne and Yeshiva in Sydney.

The first, Code of Silence, won a Walkley Award for best documentary in 2014.