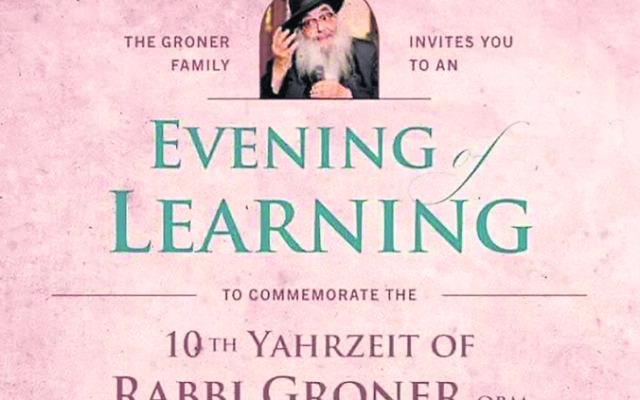 The flyer for the event.

THE Yeshivah Centre has come under fire for holding a 10th yahrzeit commemoration for Melbourne Yeshivah director Rabbi Yitzchok Dovid Groner which ignored any reference to the coverups of child sexual abuse he was reportedly involved in at the organisation.

Block noted Rabbi Groner (who was posthumously named in the report of the Royal Commission into Institutional Responses to Child Sexual Abuse for failing to report complaints against two Yeshivah employees in the 1980s) was director “at a time when several students of that centre were being sexually abused”.

Acknowledging the event had been publicised as a “night of learning … in recognition of the rabbi’s intellectual and spiritual standing among his supporters”, the ECAJ president said, “the evening should have also been an opportunity for our community to further learn what must be done to protect our most vulnerable, bring perpetrators to justice, and ensure that the tragic failings of the past are never repeated”.

Among those taking part in the event was Mizrachi’s Rabbi Danny Mirvis, who received public backing from Mizrachi president Danny Lamm.

In a statement, Lamm said, “I myself attended the event honouring the memory of one of Melbourne Jewry’s greatest leaders.”

The comment, as well as Mizrachi’s participation, was criticised by Yeshivah abuse victim turned victims’ advocate Manny Waks who said, “Imagine being a victim/survivor of child sexual abuse and dealing daily with the trauma of what was done to you, and then having to see the person responsible to a large extent being publicly honoured by others.”

Speaking to The AJN, Lamm said, “What happened at Yeshivah was a tragedy,” but said raising the abuse issue would not have been appropriate at a memorial event. “The blowup has been a completely uncalled for reaction.”

Rabbi Mirvis told The AJN his view, shaped by victims he has spoken with, is that “it is possible to both acknowledge the ongoing suffering caused by the failures posthumously identified by the Royal Commission, and mark Rabbi Groner’s contribution to Melbourne Jewry”.

Block said ECAJ was “disappointed at comments made by representatives of other communal organisations that showed an insensitivity to the concerns of victims of child sexual abuse”.