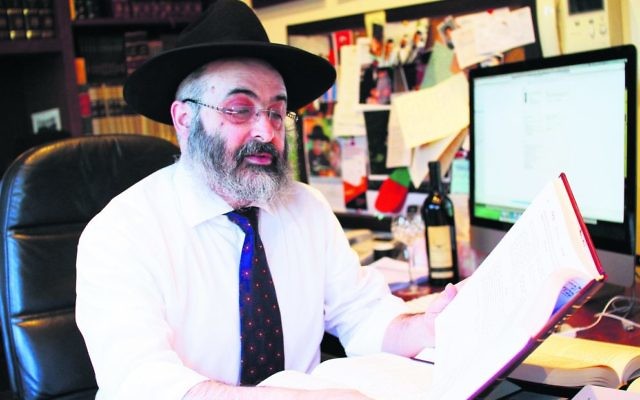 The Adass Israel School appears to have backflipped on its appointment of Rabbi Meir Shlomo Kluwgant as principal.

In June, Abe Weiszberger, Adass board secretary wrote to all staff informing them that Rabbi Kluwgant would assume the role of principal and CEO next year. Several victims of child sexual abuse were outraged at the appointment. While there has never been any claim or implication that Rabbi Kluwgant acted inappropriately with children himself, concerns were raised over how he had previously handled issues related to child sexual abuse.

Dassi Erlich, an abuse victim of former Adass principal Malka Leifer, met with the board last week and was informed that Rabbi Kluwgant’s position is not secure.

Weiszberger told Erlich, who was accompanied by former Victoria Premier Ted Baillieu that Rabbi Kluwgant is currently “a consultant” and that he would only take over as principal if victims’ advocacy group Tzedek gave Adass “the go ahead”.

Weiszberger said Adass is working together with Tzedek and other organisations to ensure if he is to become the CEO and principal it will be done the right way.

However, it seems unlikely Tzedek will give Adass the go ahead. On July 6, its chair Danny Schwarz wrote that the organisation has discontinued support to the Adass board until it states that Rabbi Kluwgant will not take up any position within the school.

“Tzedek believes that to move forward survivors must be offered the opportunity to participate in a restorative conference. This can only occur if Rabbi Kluwgant is not engaged with the school,” he wrote.

Describing her meeting with the board as “a good step forward”, Erlich said, “I hope it is the first of many steps because they gave me a sincere apology, which I appreciated.”

Erlich also asked for a public apology, and a call-out for other victims of child sexual abuse to be supported. The board supported her call, but said that they would have to speak to their insurance company before they could comply with the request.

“I felt it was genuine,” Erlich said.

At the same meeting, Erlich asked for help from the board in bringing Leifer back to Australia to stand trial.

Leifer was spirited out of Australia to Israel in 2008, with the assistance of senior members of the Adass community, just hours after allegations of her abuse surfaced.

She currently faces 74 charges of indecent acts committed against students but attempts to bring her back to Australia have been continually hampered with the Israeli judicial system ruling she isn’t mentally well enough to be extradited. However, she is allowed to live freely without any kind of treatment or hospitalisation. Last Sunday, a psychiatric panel in Israel again determined that Leifer wasn’t fit to face extradition.

“It made me quite angry and I’m pretty devastated,” Erlich said.

“There is no one monitoring her over the six months between her psychiatric panels and there are no orders for her to make herself better.”

On Monday it was revealed that Judge Amnon Cohen, who let Leifer live in the community while evading justice, had retired and that a new judge, Chana Miriam Lomp, has taken over the case.

Erlich said she is hopeful the new judge will extradite Leifer.