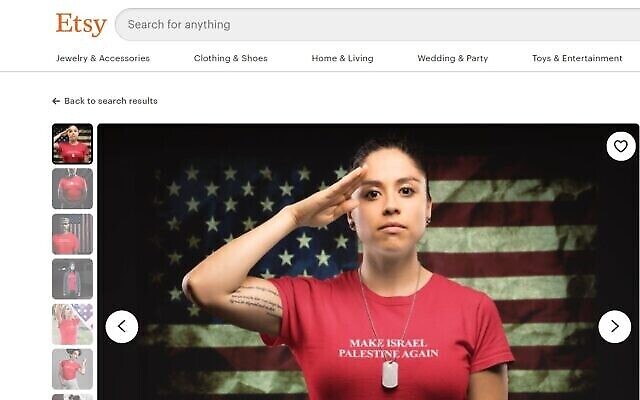 THE Anti-Defamation Commission (ADC) has criticised two online retailers for selling shirts it said were calling for the destruction of Israel.

The organisation said that Australian-based seller Redbubble, as well as Etsy, were allowing the sale of shirts with the slogan “Make Israel Palestine Again”.

Additionally, Etsy was said to sell a shirt depicting a map including Israel, the West Bank and Gaza with the word “Palestine” printed across it.

It was unclear if the shirts violated any policies of the retailers.

“These shirts, plainly and simply, call for the elimination of Israel and its replacement with a Palestinian state. Any product that explicitly promotes the destruction of a country which is home to nearly 50 percent of the world’s Jews is antisemitism of the worst kind and is beyond the pale,” said Dvir Abramovich, chair of the ADC.

“And while people are free to produce such materials, Etsy and Redbubble should not provide a forum for anyone who is employing genocidal language targeting Jews.”

Last year Redbubble came under fire for selling items with a “Zyklon B” parody logo printed on them.

At the time a Redbubble spokesperson said the platform was working to ensure offensive products don’t remain on the site.