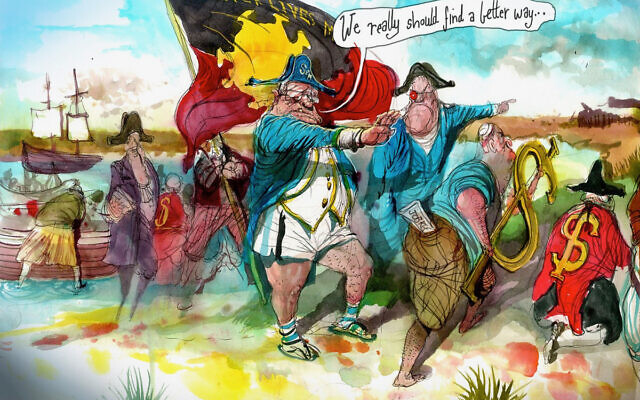 The cartoon by David Rowe published in The Australian Financial Review on Saturday.

AUSTRALIA’S former race discrimination commissioner says The Australian Financial Review (AFR)’s explanation and apology this week for its cartoon of Treasurer Josh Frydenberg, which sparked claims of antisemitism, was “peculiar”.

The AFR issued a lengthy statement on Monday after anger from several members of the Jewish and wider community over a David Rowe cartoon portraying Frydenberg holding a dollar sign with a hook nose and wearing what appeared to be a kippah.

Rowe claimed on Twitter on Saturday that Frydenberg’s character was “wearing a sailors’ cap” as per the E Phillips Fox painting Landing of Captain Cook at Botany Bay, despite the sailor in the original painting – that Frydenberg was depicted as – not wearing one.

He further explained that Frydenberg’s character was “carrying a dollar harpoon because he’s the treasurer”, and “as for the nose it’s just a quick sketch”.

“Apologies if you thought I was suggesting something else,” Rowe said.

Except the sailor in the painting is NOT wearing a cap. pic.twitter.com/KFon2gt2W4

Social media users blasted the cartoon as “anything but a ‘quick sketch'”, describing it as “disgusting, disrespectful and out of touch with reality”.

The backlash saw The AFR release a lengthy statement and an amended cartoon, without a hook nose or head covering. The dollar symbol remains. 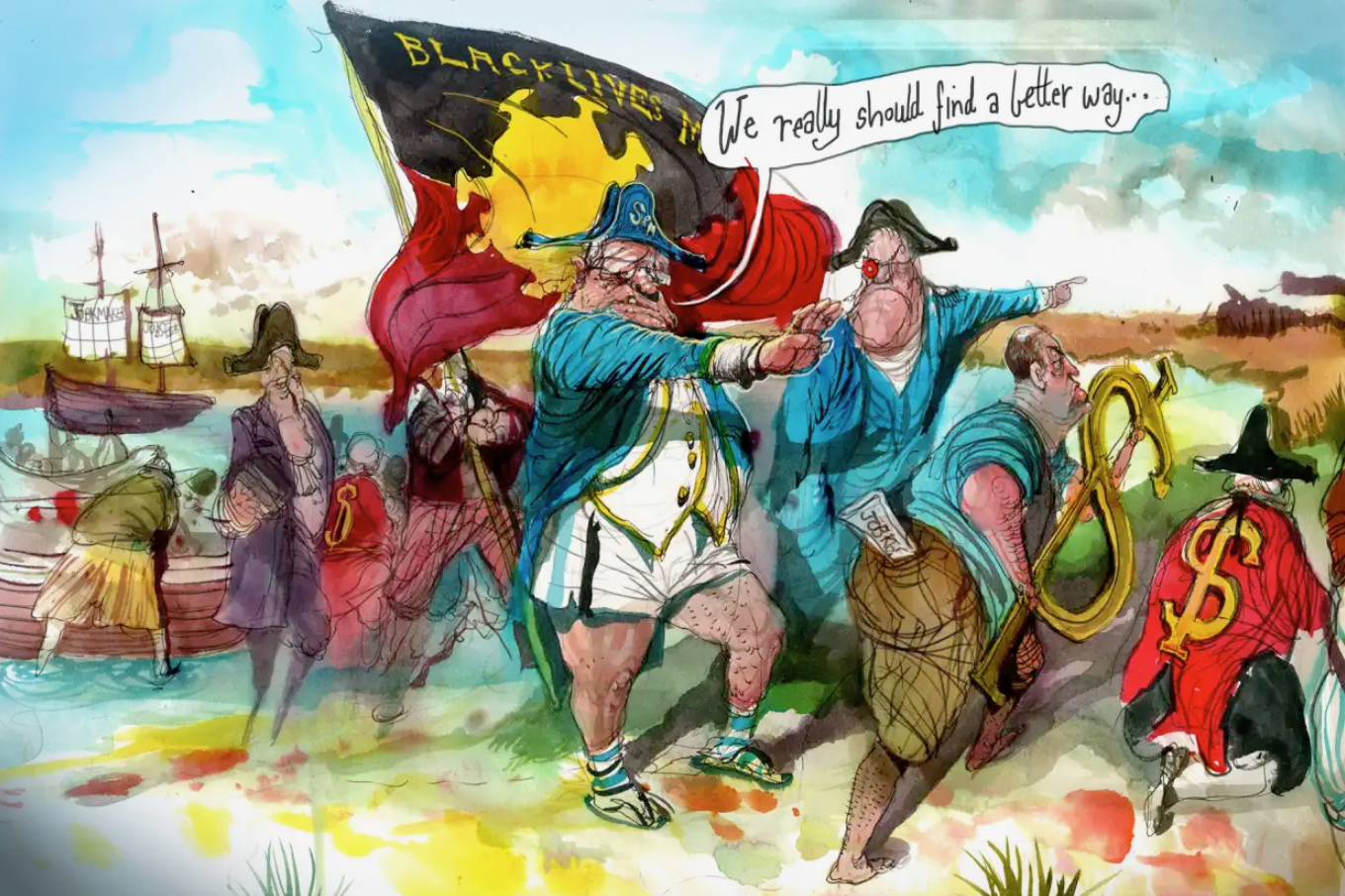 In an article titled “AFR amends, defends, apologises for criticised cartoon”, both Rowe and the newspaper apologised for the “unintended hurt and offence” caused by the cartoon, but maintained that the original illustration “contained no Jewish references, even though [we] understood why some readers had interpreted the imagery differently”.

The publication said the “hooked nose” is Rowe’s “particular caricature style that he uses for many faces”, adding, “Working for a business and financial newspaper, Rowe has used dollar sign imagery for many people, especially for treasurers and businessmen.”

It added that in the drawing process, Rowe “replaced the red hair of the young male character with the ‘sailors’ cloth cap’ of a similar young male further to the right”. 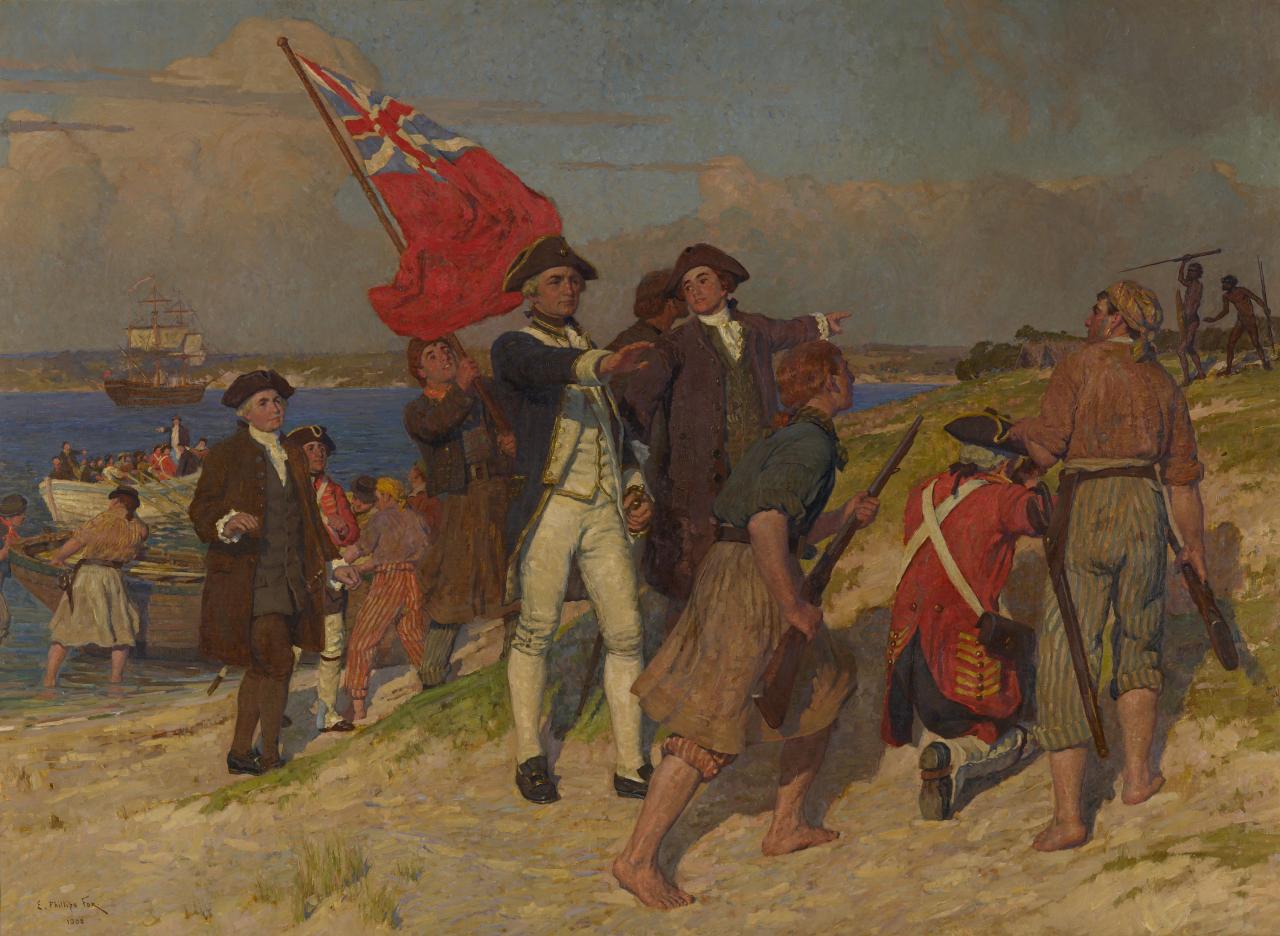 “At the time, he figured that the red hair would make it more difficult to identify the character as the balding Frydenberg,” the statement read.

“Close examination shows the knotted tail of the cloth cap which distinguishes it from a yarmulke.”

The newspaper said it “abhors antisemitism, from whatever part of the political spectrum and celebrates the contribution of people of Jewish faith and background to modern Australia”.

After speaking with Rowe, Frydenberg said he accepted the explanation, that Rowe was a brilliant cartoonist and that “we all move on”.

Responding to The AFR‘s statement, Tim Soutphommasane, who was race discrimination commissioner from 2013 to 2018, said, “A peculiar apology/defence, but a fair result. Unfortunately, all too often outlets double down when confronted with criticisms about racist stereotyping and tropes. When it comes to racism, it’s as much about the impact as it is about the intention.”

Social media users were also unimpressed, describing the apology as “even more offensive”, “condescending”, and “an attempted justification at … an intended slur”.

NSW Jewish Board of Deputies CEO Vic Alhadeff, who had numerous discussions with AFR editor-in-chief Michael Stutchbury on this issue, said, “We acknowledge and accept the apology … and trust that greater care will be taken in future in regard to matters of cultural awareness.”

The AFR statement in full:

The Australian Financial Review’s David Rowe has adjusted a cartoon after complaints that it depicted the Treasurer Josh Frydenberg in an anti-Semitic trope.

Both Rowe and the Financial Review apologise for unintended hurt and offence caused by the cartoon published in last weekend’s AFR Weekend.

At the same time, the Financial Review and Rowe maintain that the cartoon contained no Jewish references, even though they understood why some readers had interpreted the imagery differently.

As a masthead, the Financial Review abhors anti-Semitism, from whatever part of the political spectrum and celebrates the contribution of people of Jewish faith and background to modern Australia, especially to modern Australian business.

Rowe and the Financial Review’s editor in chief Michael Stutchbury agreed the imagery around the depiction of Mr Frydenberg, however interpreted, was of no consequence to the meaning of the cartoon, which was an anti-racist “black lives matter” commentary.

It would be perverse if a non-essential part of a cartoon that raised complaints of unintended racism ended up censoring a cartoon designed to make an anti-racist commentary.

That led to the unusual decision to accordingly amend the cartoon online. The cartoon published on the weekend’s editorial and opinion pages explicitly drew on the Emanuel Phillips Fox painting of Captain Cook’s landing at Botany Bay in 1770.

It depicted Scott Morrison as Cook in front of a flag emblazoned with “Black Lives Matter” and an image of the coronavirus. It played on Mr Morrison’s suggestion that Black Lives Matter protesters should find a better way to protest than gathering in large numbers in spite of social distancing restrictions.

Mr Frydenberg was depicted as the young male character holding a gun to the right of Mr Morrison’s Cook.

Those who have complained about the cartoon say the Jewish Mr Frydenberg was depicted wearing a Jewish yarmulke cloth cap, with a hooked nose reminiscent of negative racial stereotypes of Jews stretching back centuries and holding a dollar sign that reinforces greedy and crooked Jewish stereotypes.

Stutchbury says he fully accepted Rowe’s alternative explanation of the imagery. In the drawing process, Rowe replaced the red hair of the young male character with the “sailors’ cloth cap” of a similar young male further to the right. At the time, he figured that the red hair would make it more difficult to identify the character as the balding Frydenberg.

Close examination shows the knotted tail of the cloth cap which distinguishes it from a yarmulke.

The “hooked nose” is Rowe’s particular caricature style that he uses for many faces including for John Howard, Kevin Rudd, Tony Abbott, Bronwyn Bishop, Julie Bishop, Donald Trump, Theresa May, Boris Johnson and, in the weekend cartoon in dispute, Christian Porter. That comes with a loose and fast drawing style.

Working for a business and financial newspaper, Rowe has used dollar sign imagery for many people, especially for treasurers and businessmen.

In the cartoon concerned, it also appeared on the backs of red-coated English characters and helped signify Mr Frydenberg’s position as Treasurer.

Having all three issues pointed out, Rowe said he understood why this had upset some people and apologised for any hurt that this had unintentionally caused.

Rowe’s amended cartoon, republished on afr.com on Monday, removes the cloth cap on the Frydenberg character’s head and changes his nose, but retains the dollar symbol.

Rowe and Stutchbury agreed that cartooning and caricaturing can raise difficult issues of context, ambiguity and free speech.

This issue differed from other recent such controversies in that the offence taken was completely unintended and unrelated to the explicit point of the cartoon. The Frydenberg character could be removed completely without changing the cartoon’s intended meaning.

Stutchbury thanked Jewish leaders for their constructive interaction with the Financial Review over the weekend, including their acceptance of the masthead’s explanation.

Over more than three decades, he said, Rowe had become Australia’s most decorated working cartoonist. His work remained widely loved, including by the political and business figures he caricatures.