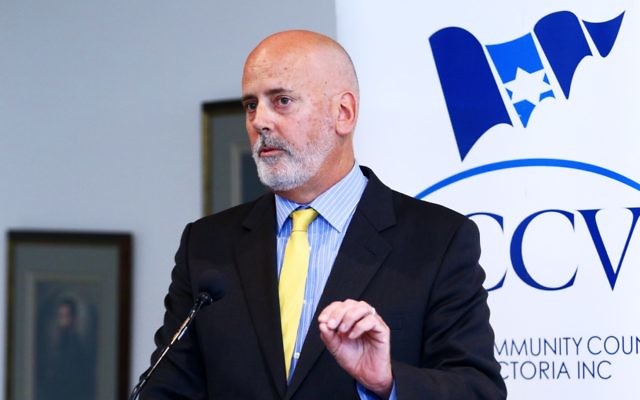 More than 100 members of the community, among them Peter Kohn, flocked to the JCCV plenum on Monday night as Age editor Andrew Holden sought to defend his paper’s coverage of Israel.

LIKE a cautious tourist on safari, Andrew Holden, editor-in-chief of The Age, initially kept his distance from the elephant in the room – in a 16-minute address to the Jewish Community Council of Victoria (JCCV) plenum on Monday night, he avoided all mention of Jews and Israel.

Perhaps anticipating his audience’s inevitable questions on a widely perceived anti-Israel bias at The Age, he deliberately focused his speech on social issues important to his readers – same-sex marriage, end-of-life ethics and homelessness.

But then came the questions from members of the community – and the elephant lumbered in for a close-up. For the next 40 minutes, Holden responded to stiff questioning from more than 100 attendees over his newspaper’s treatment of Israel.

The editor batted away an opener by J-Air radio commentator Michael Burd – whether he thought Jews were “naive” enough to believe The Age is objective on Israel while it has, according to Burd, pro-Palestinian activists on its editorial staff. “There is no group-think or mindset within The Age or The Sydney Morning Herald that says we are anti-Israel,” declared Holden. “Let me say categorically The Age has never doubted Israel’s right to exist.”

But Mount Scopus Memorial College principal Rabbi James Kennard accused Holden of “a straw-man argument … I don’t think the suggestion or concern is that you or The Age deny Israel’s right to exist …  What is concerning is what most people would call bias … Of course you’re entitled to hold Mr [Benjamin] Netanyahu to account, most of us do as well, but where is the similar … investigation into … Hamas and the Palestinian Authority?”

Holden countered: “If you were the ambassador of Mexico, you would excoriate me for the fact that the only stories I ever run about Mexico are drug lords killing people … it’s the nature of news … that we do focus on the negative and ­critical.”

But despite his dictum that, in his words, “bad news sells”, Holden claimed Israelis dying at the hands of Palestinians is not the news his readers think important.

When a questioner said “there’s plenty of bad news happening in Israel where mothers are being murdered by terrorists”, the editor expounded: “In two pages of [world news] print each day, to cover everything that’s happening across the world, those stories matter to this [Jewish] community … but to the broader community of Melbourne, it’s not one of the major stories of the world.”

Pressed by another questioner whether the terrorist murder of an Israeli woman “would not be horrible enough to sell”, Holden said that as potential front-page material, it was down the scale from “terrorist attacks in Europe … mass shootings in America … Boko Haram in Africa … Sadly it’s a scale, I know that sounds appalling.”

Appearing uneasy, Holden admitted “my mind’s gone blank” as he tried to answer former Executive Council of Australian Jewry president Grahame Leonard’s accusation that the paper’s opinion pieces champion “the pro-Palestinian cause” over “the democracy of Israel”.

And Holden was criticised when he confessed he could not recall a piece in The Age by Dr Bruce Hearn Mackinnon after November’s Paris massacres, in which the Deakin University lecturer linked the ISIS atrocities to “resentment, frustration and anger” at Israel’s treatment of Palestinians.

Holden promised to take a closer look at editorial “language” and selection of op-eds on Israel. But for the veteran journalist and editor who was on the ground in Christchurch, New Zealand, covering the earthquake of 2010, his JCCV appearance seemed, in many ways, to be another seismic encounter for him.