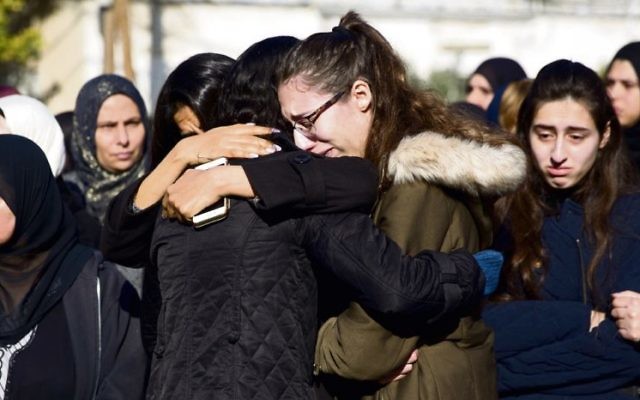 In Baqa al-Gharbiyye – As I squashed into a tiny car with Aiia Maasarwe’s father at the end of her funeral, he said, “I hope she’s now in paradise.”

Here in her birthplace near Netanya, there is a mixture of horror at what happened to her in Melbourne and relief that she is home.

Her cousin Sharef Maasarwe told me outside the mourning hall, as the funeral came to an end, “I feel at peace, really at peace, and relieved that she’s in her final place, the place she was born and she was raised.”

But the funeral in the Arab town of Baqa al-Gharbiyye wasn’t a smooth event. In fact, it saw Aiia’s family dramatically pull the plug on people who wanted to politicise their tragedy.

Mourners were stunned at Aiia Maasarwe’s funeral when her family silenced the Palestinian President’s envoys.

Hundreds of people were waiting for a Palestinian official to read a statement from President Mahmoud Abbas when Sharef Maasarwe interrupted and said he won’t tolerate the “twisting” of the tragedy into a political matter.

He declared, “We, as a family, say this is not about politics.”

The Palestinian Authority’s delegation was large, plus there were Israeli-Arab politicians who are in the midst of an election fight, so mourners had been expecting strong speeches brimming with ideology.

After being cut off before reading their boss’s statement, the Palestinian delegation scuttled outside and grumbled to local officials.

The statement was read in the open air. Altayeeb Ghauayen, a spokesman for the local municipality, told me that the Palestinian representatives felt “humiliated”.

The Israeli Prime Minister Benjamin Netanyahu had also been on the sharp end of the family’s comments.

As The AJN reported last week, relatives suspected that Netanyahu was keeping quiet on the tragedy because he didn’t want to be seen as friendly to Arabs during election season, for fear of hurting his appeal on the Israeli right.

Soon after the funeral Netanyahu phoned the Maasarwe family and, according to his office, “said that he shared in its sorrow on behalf of all Israelis”.

I learnt a lot on the day of the funeral about dignity, about Arab power dynamics in this region, and about solidarity.

Firstly dignity. It is natural when tragedy strikes to lash out at anything associated with the pain, including the place of the tragedy and the people who are there. But the family did not have a single bad word to say about Australia, and instead heaped praise upon its people and leaders.

There was great dignity in the other direction too. Australia’s ambassador in Israel, Chris Cannan, continued to treat the family with the sensitivity it received in Melbourne, attending the funeral and going to the family home afterwards.

The statement that he read on behalf of Australian Prime Minister Scott Morrison was just right.

“The goodness of her life stands in contrast with the darkness that took it,” he said. The Australian people “are grateful that Aiia chose to live and share her rich life amongst us, and we are heartbroken that such a despicable crime could occur. We are asking, ‘what must we do to stop it happening ever again?'”

The funeral left me reflecting on power dynamics in this region. I was with the Israeli-Arab academic and Haaretz writer Abed Azab, who turned to me stunned when the family silenced the Palestinian Authority (PA). It was an unusual show of assertiveness, he said, towards an Arab leader.

He noted that this family, as Arab citizens of Israel, dared to reject PA leaders, while nobody living in an area controlled by the PA would do so, just as nobody living under any other regime in this region would be brazen enough to reject their leaders.

It says a lot that Arab media who were in attendance self-censored the family’s rejection of the PA officials.

The thought that lingered most at the end of the funeral, after I watched a man in a kippah embrace the bereaved father, was about solidarity.

I reflected on the solidarity shown to the family by so many in Israel and Australia, including Jewish communities.

Jewish people in Australia felt a particular connection to this young Arab woman by virtue of her citizenship in the Jewish state. This newspaper ran her story on the front page of one of its editions because of this connection.

So often, the Arab–Israel relationship is framed only as “conflict”. But consider for a moment the fact that the Jewish community in Australia probably felt more connection and showed more solidarity to this family than it would the case of any other non-Jewish foreigner, because of her Israeli nationality.

Sometimes the Arab–Israel relationship can be a remarkable thing – a dynamic that leads Diaspora Jewry to expand its family to include non-Jewish Israelis.

Aiia Maasarwe’s death was senseless. It proclaims no message or lesson. But at least there is some small comfort in the fact that the young woman, killed with such unthinkable cruelty, was laid to rest and mourned amid such dignity and solidarity.