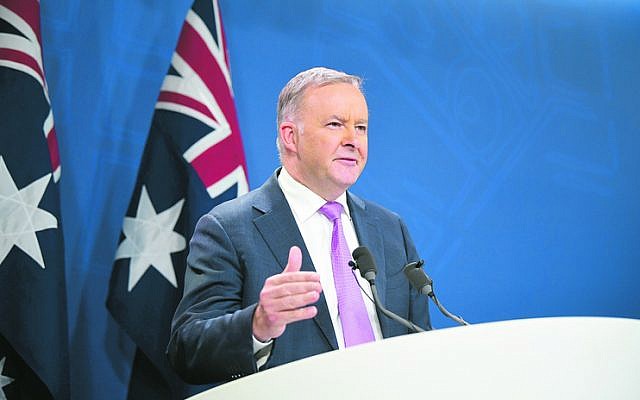 THE Executive Council of Australian Jewry (ECAJ) has urged new Labor leader Anthony Albanese to ensure his party does not go down the same route as its British counterpart.

Albanese was confirmed as Labor leader on Monday. Richard Marles is expected to be named deputy leader today (Thursday).

A founder of the federal Parliamentary Friends of Palestine, Albanese describes himself as a strong advocate of justice for the Palestinians. However he has long supported a two-state solution to the Israeli/Palestinian issue, in addition to rejecting the anti-Israel boycott movement, most notably in 2011 when the now-defunct Marrickville Council briefly adopted boycotting Israel as policy.

New Labor Member for Macnamara Josh Burns noted, “He stood strong against BDS then, as he always has, and made it clear that not only was it a divisive and costly move by Marrickville, but it was also an immoral solution which undermines the two-state solution and efforts for genuine peace between Israel and the Palestinians.”

Burns, who is Jewish and a staunch Zionist added, “Albo has always had an open door for our community, including being an annual speaker at AUJS Political Training Seminars.”

As for Marles, he spoke at the Zionist Federation of Australia (ZFA)’s biennial conference last year, at which he described the “palpable sense of cause” about Israel when he first visited to be “utterly intoxicating” and reaffirmed Israel’s right to exist peacefully and to “protect its population”.

ECAJ has written to both men to congratulate them.

“Anthony Albanese has had a good relationship with the Jewish community, although his record on Israel has been somewhat mixed. Richard Marles’ knowledge and experience in foreign and defence policy is unsurpassed in the ALP,” ECAJ co-CEO Peter Wertheim said.

Noting the historic links between Labor and its UK counterpart, Wertheim added, “We would welcome a statement making it clear that the ALP totally rejects the antisemitism wracking its UK counterpart, and has no intention of going down the same foreign and defence policy path as that taken by UK Labour under Jeremy Corbyn.”

The AJN put this to Albanese’s office, however a spokesperson said he is “not offering positions on any policy issues without consulting his colleagues”.