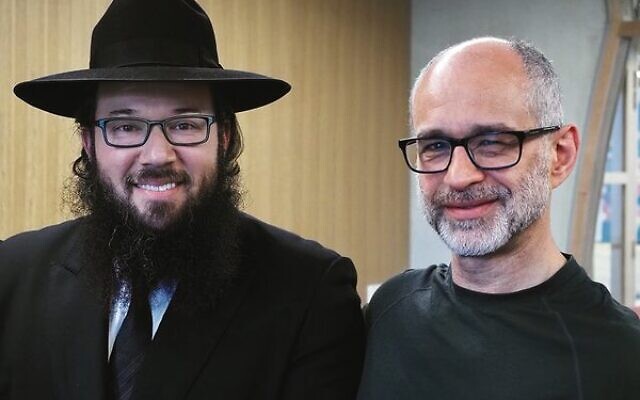 The Victorian Pride Centre on Fitzroy Street, St Kilda, provided the perfect location to hear New York’s ultra-Orthodox Rabbi Mike Moskowitz discuss how Judaism can provide a welcoming and inclusive place for people of all genders and sexual orientations, free from judgement and discrimination.

On his tour of Australia and New Zealand last month, the US based rabbi made time in his schedule to address an intimate gathering, as guest of Aleph Melbourne and the Australian GLBTIQ Multicultural Council.

Talking about how having a transgender family member challenged and changed his worldview, Rabbi Moskowitz spoke about how he devotes much of his time to making Judaism a safer and more welcoming place for LGBTIQ+ Jews, free from judgement and hostility.

Rabbi Moskowitz told those gathered that he maintains his religious practices while simultaneously attending Pride Parades and protest rallies for queer rights and inclusion.

He also stressed that the fundamental understanding that a person cannot change their sexual orientation or gender identity is of particular importance to him, and shared that he actively combats damaging practices that seek to change or convert LGBTIQ+ people to being heterosexual and/or cisgender.

Aleph Melbourne co-convenor Michael Barnett said, “It was a total joy meeting Rabbi Moskowitz. His passion for LGBTIQ+ people and issues rivals that of any ally I have ever met and sets a very high bar when it comes to advocacy and inclusion.”

He also told The AJN that “Many of those in attendance spoke of how they found it unexpectedly refreshing to meet an ultra-Orthodox rabbi who was proud to be a strong ally to LGBTIQ+ people and advocate for our full inclusion in the Jewish community.”

Barnett added, “What I took from meeting Rabbi Mike Moskowitz is that being decent to LGBTIQ+ people and other vulnerable minorities takes minimal effort, and goes a long way to mend the harms that ill-informed rabbis and others perpetrate in the name of their faith.”