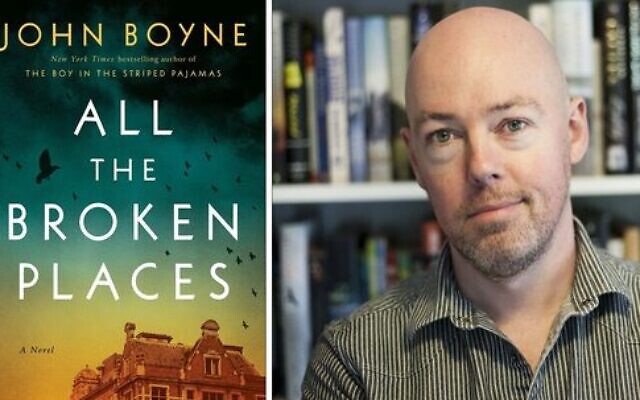 At one point in John Boyne’s new novel All the Broken Places, a 91-year-old German woman recalls, for the first time, her encounter with a young Jewish boy in the Auschwitz death camp 80 years prior.

“I found him in the warehouse one day. Where they kept all the striped pyjamas,” she says.

The woman, Gretel, quickly realises her mistake: that “this was a phrase peculiar to my brother and me”. She clarifies that she is referring to “the uniforms … You know the ones I mean”.

Boyne’s readers are, in fact, likely to know what Gretel means, as All the Broken Places is a sequel to Boyne’s 2006 international bestseller The Boy in the Striped Pyjamas. At a time when other Holocaust books intended for young readers have been challenged, the enduring popularity of Striped Pyjamas has conjured up love and loathing in equal measure for its depiction of Nazi and Jewish youths during the Holocaust. It has sold 11 million copies, appeared in 58 languages and in major motion picture form, and been the only assigned reading about Jews or the Holocaust for countless schoolchildren, mostly in Britain. Yet Holocaust scholars have warned against it, panning it as inaccurate and trafficking in dangerous stereotypes about Jewish weakness.

Speaking to the Jewish Telegraphic Agency from his Dublin home, Boyne said he hoped readers would take his new book on its own terms – as a more sophisticated meditation on guilt, culpability and evil, for an adult audience rather than children this time. But he also wants to defend the original work that made him famous.

“I do feel it’s a positive contribution to the world and to Holocaust studies,” said Boyne, who estimates that he has personally spoken to between 500 and 600 schools about Striped Pyjamas.

Not everyone agrees. A 2016 study published by the Centre for Holocaust Education, a British organisation housed at University College London, found that 35 per cent of British teachers used his book in their Holocaust lesson plans, and that 85 per cent of students who had consumed any kind of media related to the Holocaust had either read the book or seen its movie adaptation.

That level of widespread familiarity with the book led many students to inaccurate conclusions about the Holocaust, such as that the Nazis were “victims too”, and that most Germans were unaware of the horrors being visited upon the Jewish people, the study found.

As overall awareness of the Holocaust has decreased, among young people especially, Boyne’s novel has become a casualty of its own success. Holocaust scholars in the United Kingdom and United States have decried the book, with historian David Cesarani calling it “a travesty of facts” and “a distortion of history”, and the Holocaust Exhibition and Learning Centre in London publishing a long take-down of the book’s inaccuracies and “stereotypes”.

“With the rise in antisemitism, such as it is in this country, and that so often manifests through trivialisation, distortion and denial of the Holocaust, this book could potentially do more harm than good,” Centre for Holocaust Education researcher Ruth-Anne Lenga concluded at the end of her 2016 study.

Boyne came to the Holocaust as subject matter purely on his own, having never been taught about the history growing up in Ireland. Reading Elie Wiesel’s Night as a teenager, Boyne said, “made me want to understand more”.

He would read many more Holocaust books during his 20s, from Primo Levi to Anne Frank to Sophie’s Choice, fascinated by how recently the atrocity took place. “How could something that seems like it should have happened, say, 1000 years ago – because the death count is so enormous and so horrifying – how could that happen so close to the time that I’m alive in?” he thought. “And if it could, then what’s to stop it happening again?”

That fascination led to the publication, when Boyne was 33, of Striped Pyjamas, which he’d always conceived of as a children’s story. In the book, Bruno, the nine-year-old son of a Nazi commandant, befriends Shmuel, a Jewish concentration-camp prisoner of the same age; it ends with Bruno donning the “striped pyjamas” and following his friend into the gas chambers.

During his writing process, Boyne said he was concerned with “the emotional truth of the novel” as opposed to holding to historical accuracy, and defended much of the book’s ahistorical details – such as moving the Auschwitz guards’ living quarters to outside the camp, and putting no armed guards or electric fences between Bruno and Shmuel – as creative licence. A common critique of the book, that the climax encourages the reader to mourn the death of Bruno over that of Shmuel and the other Jews in the camps, makes no sense to Boyne: “I struggle to understand somebody who would reach the end of that book and only feel sympathy for Bruno. I think then if somebody does, I think that says more, frankly, about their antisemitism than anything else.”

He also justified his decisions by reasoning that a novel like his shouldn’t be the basis for Holocaust instruction.

“I don’t think that it’s my responsibility, as a novelist who didn’t write a school book, to justify its use in education when I never asked for that to happen,” he said. “If [teachers] make the choice to use a novel in their classrooms, it’s their responsibility to make sure the children know that there is a difference between what happens in this novel and what happened in real life.”

For the first decade of his book’s release, Boyne would frequently receive invitations to speak at Jewish community centres and Holocaust museums. He met with survivors who shared their stories with him.

Over the years, more research has been published about the book’s popularity in the classroom, which has led to more scrutiny of its factual inaccuracies. Other authors, Holocaust researchers and some educators have come out forcefully against the book’s use in the classroom. At the same time, Boyne said, his invitations to Jewish venues dried up.

The author has also been known to exacerbate the issue by sparring with his critics, even when they are respected institutions. Most infamously, in 2020, Boyne got into a Twitter feud with the Auschwitz-Birkenau Memorial and Museum, which said his Auschwitz-set book “should be avoided by anyone who studies or teaches about the history of the Holocaust”.

The exchange was provoked after Boyne criticised what he saw as the crassness of more recent Holocaust novels, such as The Tattooist of Auschwitz by Heather Morris. Reflecting on the spat, Boyne said of the Auschwitz memorial, “I hope that they do understand that, whether my book is a masterpiece or a travesty, that I came at it with the very best intentions.”

Boyne conceived of the sequel shortly after finishing Striped Pyjamas. It follows Bruno’s older sister Gretel as she lives in hiding after the war and successfully conceals her Nazi upbringing all the way into the present day. A preteen during the Holocaust, Gretel becomes gradually more aware of its horrors after seeing newspaper articles and documentaries, and encountering former resistance members and Jewish descendants of survivors (including one, David, who becomes her lover without knowing her true background).

Unlike Striped Pyjamas, All the Broken Places is intended for adults. It’s filled with sex, violence, suicide attempts and bad language – and also some details of the Holocaust that were omitted from the first book. It mentions the Sobibor death camp by name, for example, and also takes the time to correct Bruno’s childish assumptions about the death camps being a “farm”.

But it tells the story from the perspective of a German who was directly implicated in the Holocaust. Throughout, Gretel reflects on her complicity in the Nazi regime, and her self-interest in hiding from authorities in the following years rather than trying to bring people like her father to justice. Missing from the book is any serious discussion of antisemitism as an ideology, and to what extent Gretel ascribes to it – though there is plenty of hand-wringing over postwar anti-German sentiment.

At the behest of his publisher, Boyne has included an author’s note with All the Broken Places alluding to criticisms of Striped Pyjamas.

Even with 16 years of hindsight and the chance to rethink his bestseller, Boyne said he wouldn’t change anything. Reflecting on his youthful audience, he said, “If they weren’t reading Striped Pyjamas, it’s more likely they would be reading something that has no relevance to this subject at all.”JTA 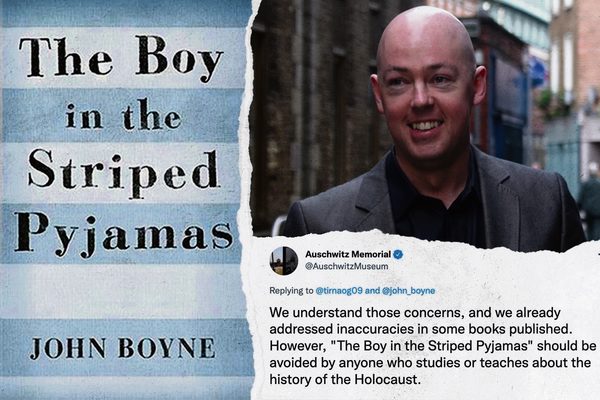