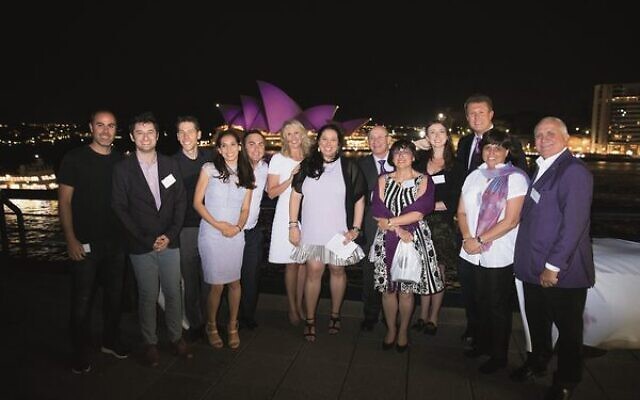 The #PurpleOurWorld family with ambassador Tracey Spicer and newsreader Peter Overton at a function held to mark the sails of the Sydney Opera House turning purple for pancreatic cancer.

A couple of months ago, Eric Idle, one of the founding members of comedy group Monty Python, shared that he had survived pancreatic cancer.

In a Time Magazine essay, Idle explained that years ago, he had asked his doctor friend about the best way to kill off a character quickly. He was writing a musical about death. Without hesitation, the doctor replied “pancreatic cancer. You may only have three weeks”. Surreal then, that a decade later, Idle found himself facing the same fate. Yet the difference between Idle and his character was time.

Idle was lucky – his words and mine – because the cancer (which he named Kenny because it’s a lot less threatening) in his pancreas was found early enough that it was operable. But as his doctor friend told him all those years ago, not so many people are as lucky as him.

Which is why when my mum was diagnosed, she very emphatically said, “I wish I had breast cancer.” Shocking? Yes. Understandable? Also yes.

Now, some eight years later, the five-year survival rate for pancreatic cancer is 12 per cent. What’s happened in those years? Awareness, funding and research. But not enough to give families more time.

My mum barely had the chance to be the nana she so desperately ached to be.

Her first grandchild, and the only one she met, was not even two years old when she died. At her funeral, Rabbi Chriqui noted that perhaps my nephew, who was born prematurely at 34 weeks, was sent by Hashem to give my mum the gift of being a nana, even for such a short period of time.

What we would give to have had more time. Which is why we work so hard to give other families what we lost.

Shortly after mum passed away, my family and I founded #PurpleOurWorld – a social media movement dedicated to raising awareness of pancreatic cancer. We know that many people are shell-shocked after a pancreatic cancer diagnosis. Families can’t cope because often, the timeline is so quick. As Idle’s doctor friend said, sometimes it’s mere weeks between diagnosis and death. There are so few survivors to champion the cause, so their voices get lost.

But you see, my mum’s voice was incredibly loud, as many in the Sydney community may remember, having been a beloved teacher at Moriah College for more than three decades.

So, in lieu of her voice being heard, we as a family must be just as loud.

Which is exactly what we are doing.

We believe that the only way we’ll be heard is if we work together. We have worked with these charities to lobby government, light up buildings, including the Sydney Opera House, worked with corporate organisations – Messina created a flavour for us which has sold like hot (cold)cakes, and teams in the NRL wore purple socks to raise awareness. And all these awareness campaigns have worked.

But we need to work harder, especially as Jews. Because being of Ashkenazi Jewish descent is a risk factor, due to the higher incidence of the BRCA gene. A stroke of irony perhaps then that my mum was Sephardi.

The problem for many people though is that most of the symptoms are often attributed to less serious conditions.

Symptoms like indigestion, lack of appetite, unexplained weight loss, back pain and stomach pain – most of which my mum had. Who in their right mind though would consider pancreatic cancer? You’d think lactose intolerance, stress, woohoo I’m losing weight, muscular pain.

As chair of the World Pancreatic Cancer Day (WPCD) Committee, I’m very proud of the WPCD campaign. The theme, #ItsAboutTime, is very close to my heart.

Because if we’d known the symptoms, maybe mum – who we now know was showing symptoms almost 18 months before her diagnosis – would have been diagnosed early enough for lifesaving surgery. Maybe mum wouldn’t have stood under the chuppah with me in excruciating pain, yet smiling because she made it to her baby daughter’s wedding. Maybe mum would have had more time.

What if? What if we all knew the risk factors, knew the symptoms, pushed for tests. What if we threw the same amount of funding at pancreatic cancer that gets given to the other major cancers. What if we shared our stories?

Maybe our loved ones would have been given more time.

Time is fleeting when it comes to pancreatic cancer.

Like Idle though, I am an optimist. When we started #PurpleOurWorld, my goal was to turn the Opera House purple. Perhaps in 10 years’ time. Yet, a mere three years later, I looked through tears, as the sun set, and the sails of Sydney’s most iconic building, turned purple.

Because like Idle, despite the trauma my family and I have been through, despite the heartache we deal with daily, I choose to always look on the bright side of life.

Life needs to be lived. For mum.