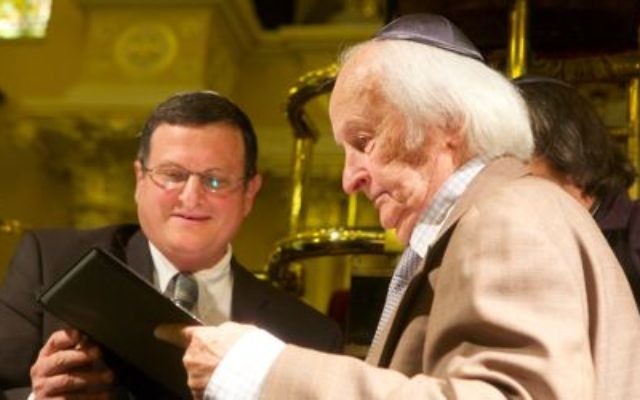 ISRAEL’S new Ambassador to Australia Shmuel Ben-Shmuel paid tribute to two Lithuanians who have just been declared Righteous Among the Nations by Yad Vashem at a service marking the 75th anniversary of Kristallnacht in Sydney on Sunday night.

Addressing the 650-strong crowd at the Great Synagogue in his first communal address since arriving in the country, Ben-Shmuel said that Josifas and Agripina Meskenas – whose son and grandchildren live in NSW – showed great bravery when the Jewish people were in their greatest hour of need.

“They risked their lives by providing asylum for a young Jewish girl escaping Nazi forces in Lithuania,” Ben-Shmuel said.

“The Talmud tells us that whoever saves a life, it is considered as if he saves the entire world,” Ben-Shmuel said.

“The late Josifas and Agripina are a shining example to everyone here tonight and for all of humanity.”

The couple’s son Vladimir and their grandchildren Eugene and Nina were at the ceremony to accept the honour from Yad Vashem.

“On behalf of my parents and my father’s parents we gratefully accept the award for recognition of humanitarian assistance for an individual in extreme peril,” Eugene said.

“I’m very proud that my grandparents had the moral courage to risk their lives for the simple sake of humanity and that they said no to pure evil.”

Israel’s new Ambassador-designate to Australia Shmuel Ben-Shmuel presented Vladimir Meskenas with the award recognising his parents Josifas and Agripina as Righteous Among the Nations.