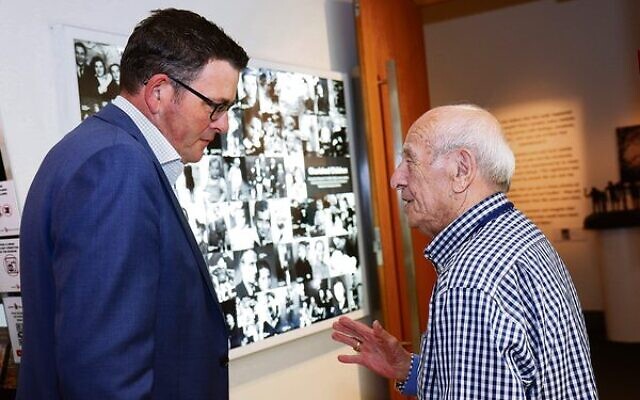 THE Victorian government will formally adopt the International Holocaust Remembrance Alliance (IHRA) definition of antisemitism, becoming only the second state or territory to do so after NSW late last year.

Ahead of an event at which Victorian politicians joined Jewish community leaders to celebrate Israel’s 74th Independence Day last night (Wednesday), Premier Daniel Andrews stated, “From attempting to water down the horrors of the Holocaust or denying the Jewish people their right to self-determination, adopting this definition ensures that Jewish history can never be rewritten or diminished.”

A statement from the Premier’s Office added, “Antisemitism has no place in Victoria – nor does any act with the intention of spreading fear or hate. The IHRA definition provides an essential tool for all Victorians to understand what constitutes antisemitism – because this is not a problem for the Jewish community alone.

“Adopting the IHRA definition will provide a stronger foundation to protect Jewish Victorians and help inform future policy and legislative changes that defend against the scourge of antisemitism in our state.”

Victoria’s Multicultural Affairs Minister Ros Spence reflected, “We do not tolerate racial or faith-based discrimination in any form in our community – this is another important step forward in rejecting hateful speech and behaviour in Victoria.”

In a May 3 members’ statement to Parliament, deputy Liberal leader and Caulfield MP David Southwick called on the government to adopt the 2016 IHRA definition, which the Liberal-Nationals state opposition did late last year, “and we would ask the Premier to follow suit”.

Southwick noted students who belong to the Australasian Union of Jewish Students, many living in his electorate, have been among victims of antisemitic attacks – and the University of Melbourne Students Union (UMSU) statement describing Israel as “a settler colonial apartheid state” has left Jewish students “feeling very uncomfortable and very unsafe”.

In a letter last week to Jewish community leaders, Southwick said with the rise of antisemitic incidents and the UMSU statement, “now is the time for the Labor government to stand up and adopt the IHRA definition”.

Zionism Victoria (ZV) and the Zionist Federation of Australia (ZFA) welcomed the announcement by Andrews, which was formally made at an Israel Independence Day reception cohosted by the two organisations.

“We are tremendously grateful that the Premier has taken this critical step. In doing so, he has sent an unequivocal signal that racism and antisemitism have no place in Victoria,” ZV President Yossi Goldfarb said.

“The importance of adopting the IHRA definition was underlined just two weeks ago when the University of Melbourne Student Union passed a blatantly antisemitic resolution, despite protests from Jewish students fearful of the impact it would have on their well-being and safety.

“Following the Premier’s announcement and the adoption of the IHRA definition by Glen Eira Council last month, Zionism Victoria looks forward to working with the State Government, local councils, other agencies and key stakeholders to promote awareness and education of what constitutes antisemitism, and in so doing contribute to the tolerance, respect and multiculturalism that Victoria prides itself on.”

ZFA President Jeremy Leibler also thanked Andrews for his decision. “Antisemitism is increasing everywhere. Premier Andrews has demonstrated that he stands with the Jewish community in the fight against bigotry, and the community thanks him for it,” Leibler said.

The Perrottet government in NSW adopted the IHRA definition in December last year.