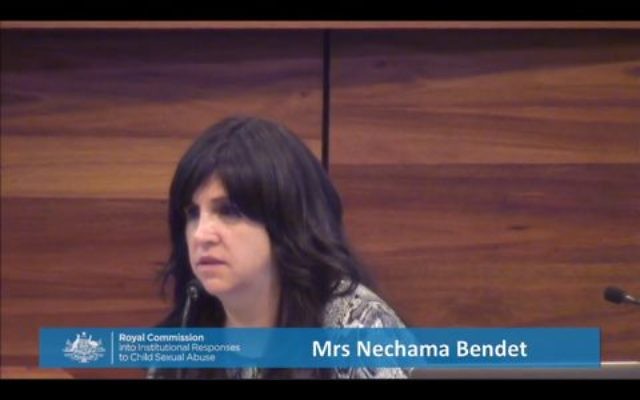 Nechama Bendet’s decision to leave the Yeshivah Centre has been met with cheers by victims of child sexual abuse, who believe she should have left years ago.

Less than a week after Nechama Bendet announced that she has left the Yeshivah Centre, she told The AJN that she is “deeply sorry for the pain and suffering that victims” of child sexual abuse have endured.

Bendet, whose decision to leave is not directly connected to child sexual abuse allegations, spoke about her 27 years at the school.

“It has been a privilege to work with so many talented and dedicated people and I am grateful for all the assistance that I received throughout my time at Yeshivah,” said Bendet.

“I am overwhelmed by the beautiful outpouring of support that I received since my departure from Yeshivah was announced to staff last week.

“I hope to be able to continue to make a contribution to our wonderful community.”

Despite Bendet’s years of dedication to the organisation, the past six years have been marred by calls for her to resign due to Yeshivah’s lack of response to child sexual abuse allegations.

“I am deeply sorry for the pain and suffering that victims of child sex abuse have experienced and hope that the steps that Yeshivah has taken, including the redress scheme, childhood foundation accreditation and improving child safety standards will offer them some comfort and tangible recognition for the abuse that they have suffered,” said Bendet.

When Bendet’s resignation was announced last week, child sexual abuse victim Manny Waks, who was the first person to publicly reveal his abuse at Yeshivah, said it was “significant milestone” for Yeshivah.

“As General Manager of Yeshivah until 2014 and a member of its Board of Trustees until recently, Bendet was one of the most senior members of the Yeshivah leadership whose response to allegations of child sexual abuse and whose treatment of victims and survivors, our families and supporters, led to its appearance before the Royal Commission into Institutional Responses to Child Sexual Abuse,” said Waks.

“Notwithstanding adverse findings of the Royal Commission in relation to the Yeshivah leadership of which she was a part, Bendet has ignored the calls of victims/survivors and many others in the community to acknowledge her role in the child sexual abuse scandal and to step away from Yeshivah, causing many of us ongoing and unnecessary trauma and distress.

“Bendet’s departure is another significant milestone in our journey towards justice and healing, and we continue to call for and expect that all those who were involved in the leadership of Yeshivah in the lead up to the Royal Commission and who were implicated in its findings, particularly Rabbi Zvi Hirsch Telsner and Rabbi Chaim Tzvi Groner, are removed from positions of leadership which they still hold within Yeshivah today.”

The Yeshivah Centre wrote in an email to staff last week that Bendet’s role had been the topic of discussions for a few weeks.

“These discussions have culminated and we can advise that Nechama’s employment with Yeshivah has now concluded,” the Yeshivah Centre said in a statement.

“Nechama, as an old collegian, parent and grandparent of the school, has been a valuable contributor to Yeshivah for over 25 years.

“She was subsequently appointed General Manager and held this role until 2014.

“Since that time she has continued in her role in maintaining relationships with key government and other organisations as well as driving fundraising activities for the Centre.”