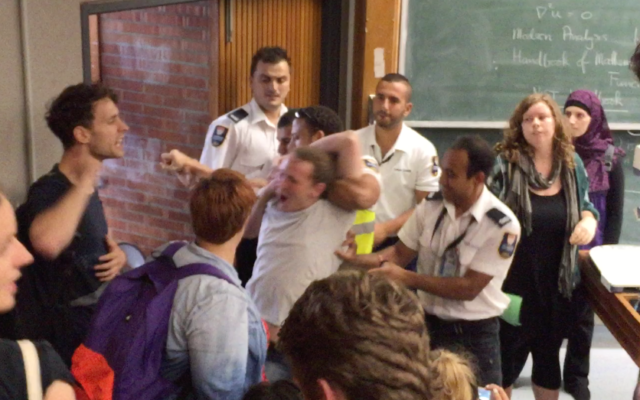 A LECTURE by retired army colonel Richard Kemp at the University of Sydney was disrupted by at least a dozen screaming students who fought with security on Wednesday afternoon.

The students had burst into the room shouting “Richard Kemp, you can’t hide, you support genocide” and wrestled with security guards before being removed from the hall.

Kemp was giving a lecture about ethical dilemmas of military tactics and dealing with non-state armed groups.

According to the Australia/Israel & Jewish Affairs Council’s Glen Falkenstein, protesters stood on chairs, began to push students and shout loudly at those who objected to their behaviour.

Professor Jake Lynch, the director of the Centre for Peace and Conflict Studies (CPACS) at the university, shouted in the faces of students and screamed that attempts to remove the protesters was a violent attack on freedom of speech by security guards. He was also seen holding money to the face of a Jewish student and filmed students in attendance without their consent. Prof Lynch later explained to The AJN that a woman behind the student not visible in the frame was physically attacking him and he held out the money to illustrate that he would sue her if she did not stop.

“This protest was about my perspective on the IDF,” Kemp said. “I was in Israel during the 2014 summer conflict and I do believe that the IDF in their attack on Hamas in Gaza … were doing everything they could to protect civilians … people have told me I am wrong, but no one has told me what more steps Israel could take to minimise civilian casualties.”

In a letter to Sydney University vice-chancellor Dr Michael Spence, Kemp said Lynch’s behaviour was “deeply shocking and offensive” and that Lynch sought to incite and encourage the student protesters.

“Can it be right that members of your university staff should indulge in such disgraceful action?” he asked.

“I urge you to investigate this incident and to take action against the students and staff members who were responsible for the behavior that I have described.”

In a statement to The AJN on Friday, Sydney University said it was investigating the incidents.

“The University is deeply concerned about events surrounding a protest on campus and has commenced an investigation into the incidents,” it said.

“The University is an institution which is fiercely committed to the protection of free speech within the limits of the law. It supports the right to protest and academic freedom for staff and students. It does not support violence, racial vilification or acts which prevent others from also having access to those rights.

“While the investigation is underway, the University will not be commenting on the details of the incidents.”

The Australasian Union of Jewish Students (AUJS) said the protest was a deliberate attempt to intimidate Jews in the audience, and described it as an “aggressive attack on the academic pursuit of knowledge and information, as well as free speech”.

“AUJS thoroughly condemns the highly aggressive tactics used by the purportedly ‘pro-Palestinian’ protestors to intimidate audience members and impede on their right to listen to a public lecture given by a highly respected expert, who happens to disagree with their view of the world,” AUJS national political director Julian Kowal said.

“[The protest] was undoubtedly intended to intimidate the largely Jewish student audience and make them feel unwelcome at the University of Sydney.”

AUJS called on the university to “have all options available in deciding how to discipline Prof Lynch”, who it said intimidated Jewish students by hurling verbal abuse and filming them without their permission “after he was repeatedly asked to stop”.

“Many of the Jewish students were traumatised by the highly confronting and violent experience, and will feel unsafe to attend future public lectures and events with the fear of further abuse,” Kowal said.

The AJN understands several formal complaints have been registered with the university, including by former Minister for Higher Education Peter Baldwin, who attended the lecture.

Labelling the protest as “repulsive”, he said: “The group chanted continuously and defied the (very restrained) efforts of the security guards to evict them. They clearly intended to disrupt the meeting to the point where it could not continue. It was only after a concerted effort by the security people, with the protestors resisting violently, that the talk could be resumed. This was a truly frightening episode. At one point the lights went out, leading people to wonder what might come next.”

Baldwin added that Sydney University is “becoming increasingly poisonous and fearful for identifiably Jewish students, especially those who have the temerity to defend Israel”.

AUJS has also lodged a complaint with the university, saying: “We hope that the university will take this complaint seriously and deal with those involved appropriately in order to ensure the safety and security of Jewish students on campus.”

“Their attempts to bully campus security personnel who restored order was also shameful,” he said. “These are the same people who have on numerous occasions invoked the principle of academic freedom to justify their engagement in political advocacy on campus. Their hypocrisy is now obvious. For them, academic freedom does not apply to views they disagree with.”

Wertheim described the protesters as “cowards who are afraid of the truth”.

“Fortunately, the lecture was resumed after a 15 minute disruption and Kemp’s presentation was so compelling that even academics who had participated in the earlier protest asked him questions and were given comprehensive answers.

“The ECAJ is proud to have facilitated the lecture.”

A petition calling for Sydney University to remove Prof Lynch from its staff has attracted more than 4000 signatures since it was formed last Friday.