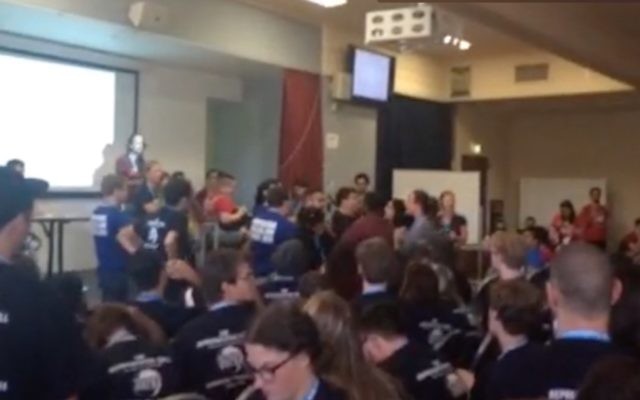 A screengrab of the NUS national conference.

THE Australasian Union of Jewish Students (AUJS) has condemned scenes of “overt anti-Semitism” at the National Union of Students’ (NUS) national conference in Melbourne last week as an anti-Israel motion was debated.

The motion, put forward by far-left student delegates, referred to Israel as “an apartheid state”, accused it of “ethnic cleansing”, and said that in the event of future hostilities between Israel and its neighbours, regardless of which side is at fault, “NUS will issue statements in solidarity with the Palestinian people” and “will take steps to enact, where practicable, a boycott of Israel”.

A conservative student of Palestinian descent, a member of the Liberal club, was due to speak against the motion, but was prevented from doing so when some of the far-left delegates stormed the stage, took the microphone from his hand and moved a gagging motion.

Noting that supporters of the motion yelled the words “Jew” and “Ashkenazi Jews” as terms of abuse, AUJS national political affairs director Julian Kowal said, “Overt anti-Semitism could not be expressed in more simple terms than using the term ‘Jew’ with the intention to defame or insult another individual.”

Stating that AUJS is “deeply concerned that the NUS conference is a space in which students feel comfortable to use ‘Jew’ as an insult”, he added, “The fact that they had to resort to violent behaviour and overt racism, and censored a student from speaking in order to get their motion passed, shows that they are cowards who are afraid of the truth.

“University authorities should not allow anybody, especially these fanatics, to behave as self-appointed censors and arbiters of ‘correct opinion’ on campus.”

Liberal delegate Matthew Lesh told The AJN it was “disappointing and disheartening” to witness the “blatantly derogatory and untrue comments” during the Israel debate.

“The far left on campus seem to have lost any resemblance of balance, or connection to reality, when it comes to this issue,” he said.