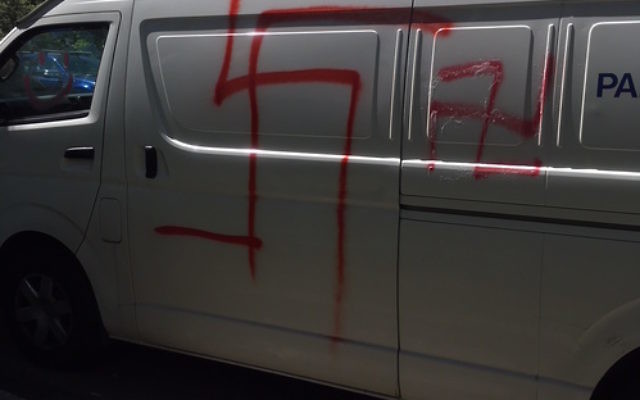 POLICE are appealing for information after a swarm of swastikas were spray-painted onto several vehicles in St Ives earlier this month.

A resident who lives on Sturt Place where the vandalism took place on the evening of January 6 told The AJN, “It was extremely disturbing to wake up that Sunday morning to those red swastikas … I suspect the neighbourhood itself was targeted quite deliberately given its demographic constitution.”

However, Inspector Ian McCarthy from the Ku-ring-gai Local Area Command told The AJN, “We don’t believe it was bias-related. It was kind of random and it does just look like kids being destructive.

“There was some malicious damage on a number of vehicles in the area … there was another one that said ‘rapist’ and another that said ‘free candy’.”

Although a building manager in the area assisted police with security footage that captured the malicious damage, McCarthy said, “We have done canvasses of the area and haven’t been able to identify who has done it. We are urging anyone with any information to contact Hornsby police or Crime Stoppers.”

Denouncing the recent display of virulently racist symbols, NSW Jewish Board of Deputies (JBOD) CEO Vic Alhadeff said, “Racially-motivated vandalism has no place in civil society. All well-meaning people should condemn these attacks and those who engage in such despicable behaviour. We hope the authorities catch the thugs who were responsible.”

Meanwhile, offensive graffiti stating “Turnbull Goldmans Jewboy in Oz 1st in Oven” was removed from the walls of Martin Place station after the incident was reported to the JBOD on January 18, who immediately brought it to the attention of Sydney City Council.

“We thank the council for acting swiftly to remove what was highly objectionable graffiti,” Alhadeff remarked.

The recent incidents have come soon after the Executive Council of Australian Jewry (ECAJ) reported an almost 10 per cent increase in anti-Semitic incidents in Australia from October 2016 to September 2017, over the preceding year.

According to ECAJ research officer Julie Nathan, in the first quarter of the 2018 ECAJ anti-Semitism reporting period, the number of incidents of anti-
Semitic vandalism in Australia is already half the total number for the 2017 reporting period.

Of the St Ives vandalism, Nathan said, “The perpetrators have shown how despicable they are not only by vandalising property at random but also by using one of the most racist symbols in the world, the swastika, under whose banner millions of innocent people were slaughtered. Their actions are to be abhorred and condemned.”