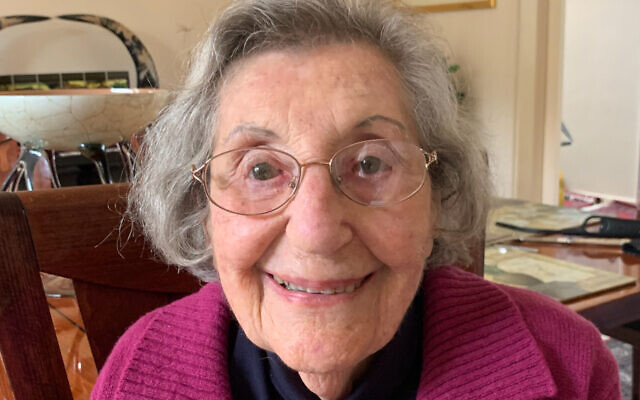 PASSING away peacefully last week, a day after her 99th birthday, Marianne Schwarz knew she had landed a strong punch on the greatest physical challenge to her twilight years, returning to a fulfilling life after going 12 rounds with COVID-19.

Taken to Cabrini, Marianne suffered a series of health challenges, developing an upset stomach and a high fever. She also contracted bacterial pneumonia and a flare-up of pre-existing bronchitis. But keeping her sense of humour, she quipped to The AJN, “I had a lovely view [from the hospital room]. I felt important because I was locked up.”

On being discharged, she noted, “I can’t say I feel particularly sick … I’m a bit more tired maybe.”

The great-aunt returned to her independent lifestyle, said her niece Karin Zafir, and made the last 12 months happy and memorable.

“She drove her car, played bridge, and went with us on a B’nai B’rith weekend to Ballarat, where she walked around Lake Wendouree.”

However, she began feeling ill a few weeks ago and entered hospital.

Marianne had been no stranger to daunting life challenges. During the Shoah, she was imprisoned at Theresienstadt, Auschwitz and Bergen-Belsen. After the war, she spent time in Sweden before arriving in Australia in 1946.

She later visited Europe to marry Joschi (Joseph) Schwarz, and the pair came back to Australia in 1952. In 1971, she completed a welfare officers’ course and worked for Jewish Welfare (now Jewish Care Victoria). She was an officer for Victorian community services for 15 years, and worked for the Children’s Court for a decade.

Retiring at 65, Marianne dedicated many hours to B’nai B’rith, where she was a veteran member of the Raoul Wallenberg Unit. She related her Shoah experiences to Victorian schoolchildren through Courage to Care, and was a member of WIZO Masada.

Reflecting on the past 12 months, Zafir told The AJN, “She really rebounded, even though she was never quite the same, not as strong. But she was still pretty independent.”

Paying tribute to Marianne, B’nai B’rith Victoria CEO Ellana Aarons said Marianne “embodied all that B’nai B’rith stands for and all that it seeks to contribute”.