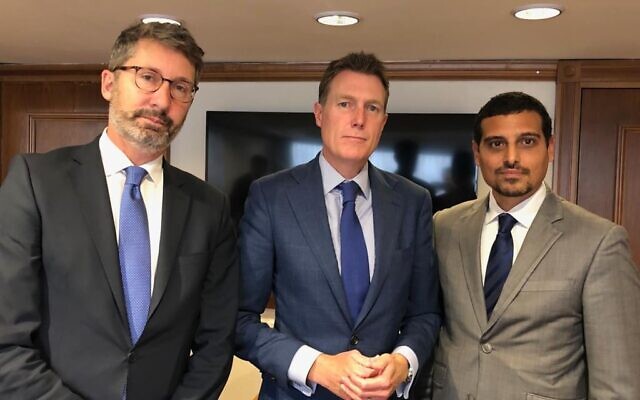 Porter, who spoke to The AJN after spending a week in Israel for trilateral talks with UK and Israeli leaders, met with Israel’s Attorney-General Avichai Mandelblit and Justice Minister Amir Ohana during his trip.

“I spoke with the minister and attorney-general directly and they explained what to expect in the process over the next six months,” Porter said.

It’s been great to be in Israel to further our close ties with this amazing country. I reaffirmed Australia’s stance on the Leifer extradition and appreciate the time taken by Israeli ministers to discuss the issue. https://t.co/LqhPQgygGb

“I left those meetings comforted by the fact that they understand the seriousness of the issue for Australia and they know we have a strong commitment to seeing this resolved.”

Porter, who met with two of Leifer’s alleged victims in Parliament earlier this year, said the Israeli authorities assured him that all resources required have been allocated to the case.

“I felt far more assured than I had been previously that there is a real commitment on behalf of the Israeli authorities and I came away with a degree of comfort.

“They understand how important it is, how serious the charges are and our level of frustration.”

He also told The AJN that Israeli authorities are aware that any further delays in the process will reflect negatively on the Israeli legal system.

While in Israel, Porter also met with child sexual abuse victims’ advocate Manny Waks who asked him to take legal action in Australia against those allegedly involved in helping Leifer flee.

“We hope and expect that there will be full accountability for all those responsible in this case – both the alleged perpetrator of the sexual abuse against numerous innocent children, Malka Leifer, and those who facilitated her escape,” Waks said.

“The fact that some of the Adass leaders allegedly responsible for Leifer’s 2008 escape are the same leaders today is cause for concern regarding the safety and well-being of Adass students today.

“And the fact that the Adass leadership is still steadfastly refusing to publicly apologise is a poor reflection on them. It does not meet their own religious standards of repentance, and it certainly does not meet any moral standard.”

Porter also took time to visit the Old City and Yad Vashem while on his first trip to Israel.

“The trip through the Old City of Jerusalem – seeing the four quarters managing to coexist in such intensely close proximity – was very interesting.”