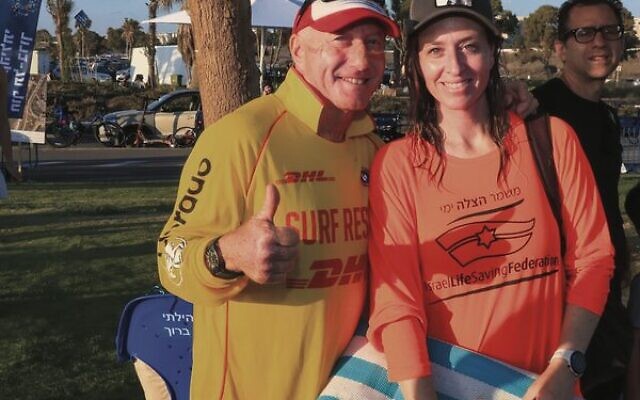 AUSSIE olim Paul Hakim and Sarah Vanunu are proudly representing Israel this week at the 2022 Lifesaving World Championships in the Italian coastal city of Riccione, as the Jewish State makes its debut in the biennial International Lifesaving Federation-run tournament.

Israel recently became a new member of the ILF, comprised of 148 national federations.

And in July this year, an international surf lifesaving competition was held in Israel for the first time, when included as an exhibition sport at the 21st Maccabiah Games.

Vanunu and Hakim – both former residents of the Sydney beachside suburb of Coogee – competed at the Maccabiah Games, the latter winning bronze for Israel in the men’s masters beach flags competition.

Hakim is the CEO of the Israel Life Saving Federation [ILSF], which he co-founded in 2019 with his brother Danny, and Lisa Segelov.

Based on the Australian model, the not-for-profit organisation’s volunteers saved or assisted more than 70 people needing rescuing from the water in Israel in 2021, and it runs training courses, and Nippers programs and competitions for kids, across coastal Israel.

“I’m very proud to be leading Israel’s cohort for the first time in the Lifesaving World Championships, and I’m excited to be part of this historic event, to put Israel on the world map,” Hakim said.

“There is great potential here in Israel, with a lot of enthusiasm that surf lifesaving will become a national sport, just like it is Down Under.”

Vanunu – now an ILSF board member and regular volunteer – said she is “honoured to put on the blue and white cap, and represent Israel in such a significant sport, close to my heritage as an Australian”.

She added, she feels surprised – in a good way – that the opportunity came her way so quickly, as “I only really started ocean swimming and surfing during the COVID lockdowns, when my neighbour [near Tel Baruch beach, north of Tel Aviv] suggested we go swimming together early in the mornings in the ocean.

“It was kind of a thrilling escape, and I discovered I could actually swim quite well.

“The sport, the social aspect, and the community service side of it all, brings me a lot of joy and fulfilment,” she said.

“I’m so happy I was part of it, as I pulled four people out of the water who weren’t able to complete the swim.

“I joined ILSF to raise awareness about water safety, and to do what I can to prevent unnecessary drownings,” Vanunu said.

In a further boost for the competitive form of surf lifesaving, it will likely be upgraded from ‘exhibition’ to ‘official’ status at the next Maccabiah Games, and it will make its Olympics debut in 2028 in Los Angeles, followed by Brisbane in 2032.