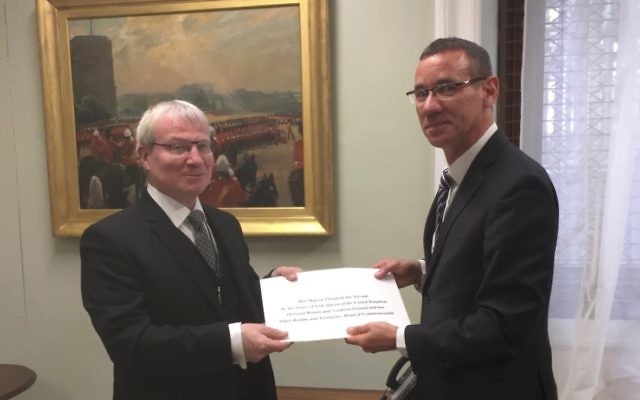 AUSTRALIAN-BORN Mark Regev arrived in Britain this week to take up his post as Israel’s new Ambassador to the UK.

The 55-year-old, who made aliyah in 1982, tweeted that he was “excited to be here”, upon presenting his credentials at the Foreign Office in London on Monday.

It was announced in August 2015 that Regev, a former foreign media spokesman for Israeli Prime Minister Benjamin Netanyahu, would succeed Daniel Taub in the position.

Born Mark Freiberg to Martin and Freda Freiberg, the 55-year-old diplomat grew up in Melbourne, was a student at Mount Scopus Memorial College, attended Kew Synagogue and was a member of Habonim.

Philip Hall, a former school friend, who also went to Habonim, was elated this week at news of the appointment.

He told The AJN Regev often meets with ex-Aussies and joined a group of former Australians who made aliyah – Yoni Glickman, Paul Nirens and Garry Savel – to hike the Shvil Yisrael, Israel’s national walking trail that spans around 1000 kilometres between Eilat and the approach to the Lebanon border.

Recalling animated discussions Regev took part in during his early teens at Habonim about Israel, Hall said: “You could tell from an early age he would go into politics.”

Mount Scopus principal Rabbi James Kennard told The AJN, “We’re always delighted to see the ­achievements of former students of Mount Scopus, and are especially proud of Mark Regev for his exceptional service for Israel and the Jewish people. We wish Mark every success in this particularly important role.”

The sentiment was echoed by Danny Lamm, president of the Zionist Federation of Australia. Declaring Regev’s posting as “an outstanding appointment for Medinat Israel”, he added that it was “wonderful recognition of Mark Regev, a successful Australian oleh of whom we are extremely proud. He brings eloquence and erudition to the Court of St James’s [where Ambassadors to the UK are formally received and accredited] following on a tradition of senior ambassadors to this very important appointment.”

After making aliyah, he lectured in international relations and strategy at the Israel Defence Forces Staff College before joining the Foreign Affairs Ministry in 1990, serving as deputy chief of mission at the consulate in Hong Kong and as a ministry spokesman from Israel’s embassies in Beijing and Washington. In 2004, he became the Foreign Affairs Ministry’s spokesman in Jerusalem.

Three years later, Regev became the spokesman for Netanyahu’s office and, as with his role at Foreign Affairs, he became Israel’s global English-language voice during the Gaza campaigns and other crises.

Welcoming Regev’s posting, president of the Board of Deputies of British Jews Jonathan Arkush said: “We are delighted that Prime Minister Netanyahu has chosen someone as high calibre as Mark Regev to serve as Israeli Ambassador to the United Kingdom.

“Over the years Mr Regev has worked tirelessly to ensure that Israel’s voice is heard in the international media, never shying away from tough questions and setting out Israel’s case with clarity and erudition. His deep knowledge of the Middle East and Europe stand him in good stead and we very much look forward to working with him in his new role.”