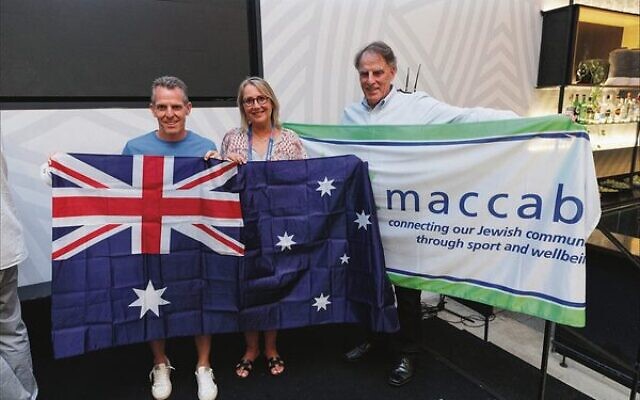 THE sense of pride and excitement of arriving in Netanya on day one of the Australian team’s 2022 Maccabiah Games precamp on July 7 was strong, but it reached new heights at a Shabbat dinner the following evening, when the team’s flagbearers and captain were announced.

Cheered on by the 540-strong Australian junior, open and masters athletes – plus 85 volunteer coaches, team managers and officials – Australia’s head of delegation Barry Smorgon presented the Australian flag to its carriers for the July 14 opening ceremony – Jon Pillemer and Lauren Ehrlich.

Pillemer – a former National Soccer League star and Hakoah FC legend – will remarkably play over-55 masters men’s football in his ninth consecutive Maccabiah Games, after making his debut in 1989 in the open men’s with his brothers Michael and Russel, who are also in the current team, for the fourth time.

A beaming Pillemer said, “I just feel so deeply honoured and humbled to have been chosen to carry the Australian flag with Lauren, and to be captain – it means a lot.

“Every time I’ve marched into the stadium for the opening ceremony since 1989, it has given me goosebumps,” he continued.

“And this time, it will be extra special to be marching up the front with the flag, and to have my brothers also marching, and my nephews Zach (16) and Tom (20), who are in the open men’s football team.

“My 81-year-old mother Yvette, and my wife and kids, will be there too.”

Pillemer – who will play his first match the day before the opening ceremony – described the precamp as “fantastic so far, with a great atmosphere – and so much organisation has gone into it”.

“It’s especially great to see the team’s debutants – mostly the juniors, but even some masters – enjoy this truly unique experience.” 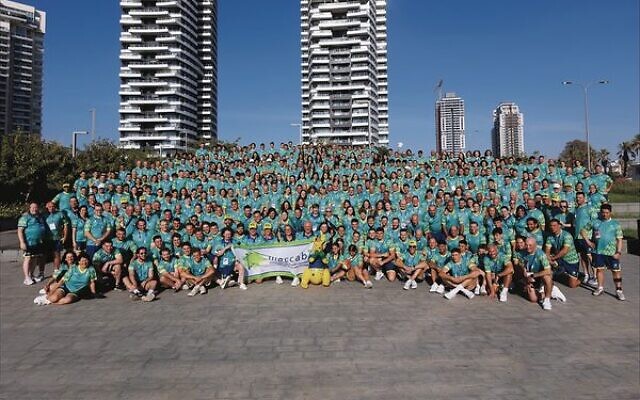 All together now! The Australian team athletes and officials outside the Maccabiah Games precamp
hotel in Netanya on July 8.
Photo: Maccabi Australia Team Media

Ehrlich won a bronze medal in tennis at her first Maccabiah Games in 2005, she was the masters tennis team manager and coach in 2009, and masters regional manager for the 2013, 2017 and current Maccabiot.

A Maccabi leader full of enthusiasm, she is on the national board, and is a recent Maccabi NSW president, a long-time former leader of Maccabi NSW Netball Club, and currently chairs Maccabi Life Australia.

She is also a former head of delegation at the Pan Am Maccabi Games, and was even once Israel’s Maccabiah netball team coach.

Ehrlich said she feels honoured, and a tad surprised, at being named co-flagbearer, as she’d “put several other names forward”.

“I feel humbled, because to represent our community and story in this way is such an honour – it’s magical.

“Maccabi Australia is all about engagement and community through sport, but the Maccabiah Games and the opening ceremony are next level, with 10,000 Jewish athletes singing Hatikvah as one – there is no better feeling.”

As for her masters regional managing role, Ehrlich said, “It’s about helping create opportunities for the athletes to achieve their best, and if I can do that, I’m doing my job.”