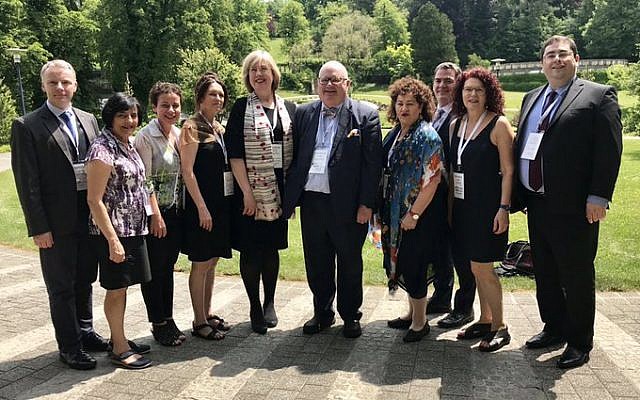 The Australian delegation to the International Holocaust Remembrance Alliance, led by Australia's ambassador to Germany Lynette Wood, and head of the UK delegation Eric Pickles (centre).

AUSTRALIA has been admitted to full membership of the International Holocaust Remembrance Alliance (IHRA) following a unanimous vote of the plenary in Luxembourg.

“Now that Australia is a full member, with a seat at the table, we are able to fully participate in IHRA’s efforts to formulate policies, plans and programs advancing Holocaust education, commemoration and research,” the Australian delegation to IHRA said in a statement.

Israel congratulates #Australia on becoming a full member of @TheIHRA following a vote of the IHRA plenary in Luxembourg.

The group noted that this is “particularly important” given the large number of Holocaust survivors and their descendants in Australia.

“Membership also provides a mandate to further enhance Australia’s efforts in Holocaust education and commemoration with the support through IHRA of leading experts from around the world.”

Congratulations to Australia, who today became a full member of the IHRA. "We look forward to the enhanced opportunities to learn from IHRA members and to share our unique perspective on Holocaust education, research and remembrance," says Ambassador Wood. #IHRAinMondorf pic.twitter.com/d58yYBdKI0

Australia is the 33rd state to achieve full membership and the first Indo-Pacific nation to join IHRA.

This has been a four-year process supported by the United Kingdom, as Australia’s mentor, led by Lord Eric Pickles.

The Australian government’s commitment to IHRA enjoys bi-partisan support and is facilitated through the Department of Foreign Affairs and Trade (DFAT).