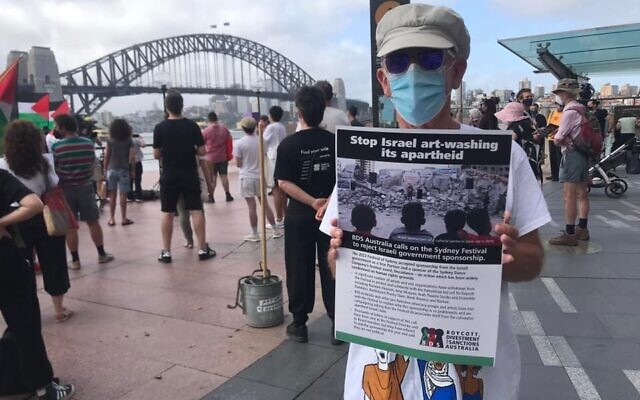 THE UK government is reportedly considering a ban on BDS in its upcoming legislative agenda. Thirty-five US states have already passed similar legislation. Australia is conspicuously behind.

With this is mind, the Australian Jewish Association (AJA) is calling for Australia to introduce anti-BDS legislation. The overshadowing of the Sydney Festival by a particularly vicious BDS campaign highlights the urgency. AJA has secured support from federal MPs, including at ministerial level.

Professor Kontorovich provided important context, outlining how economic warfare has been a principal weapon against Israel, with Arabs declaring a boycott even before its establishment. Anti-Jewish boycotts go back further still. The boycotts were a major economic threat up until the 1970s, primarily due to Arab oil power.

US legislators, and even president Carter, not renowned for his love of Israel, recognised the boycott was fundamentally antisemitic. Thus, under a Democratic administration, laws were passed outlawing cooperation with the Arab boycott.

Companies had to choose, comply with the boycott, and risk losing American business. An easy choice for most. Gradually the boycott waned. Arab countries reduced hostilities. Some even recognised Israel.

Unhappy with this situation, within the EU and United Nations, a new coalition took up the mantle of boycotting the Jews. At the infamous 2001 Durban Conference, the motto “BDS” was coined.

This boycott was to be pushed, not by countries, but by NGOs.

BDS can’t convince intelligent people that Israel is singularly a terrible country. Even if they could, most companies wouldn’t care. Companies do business with everyone. Case in point, China.

Instead, they harass anyone engaging with Israel. This strategy of creating a toxic social media environment is precisely what was employed against the Sydney Festival and its individual artists.

Behind these laws is this principle. Anybody is free to boycott Israel, however taxpayers needn’t subsidise discriminatory boycotts. Consequently, the laws variously make boycotters ineligible for investment by state pension funds, investment vehicles, or for state contracts.

More recently, ultra-woke ice cream company Ben & Jerry’s were themselves subject to a massive online campaign by people even more woke than they. They caved and announced a boycott.

The Biden administration was of no material help, so it fell on individual states to act. So far, it has cost parent company Unilever almost a billion dollars, as states from New Jersey to Arizona withdraw investments. The backlash is only growing, and Unilever will probably quietly backpedal, ensuring this episode also ends in tears for BDS.

Despite these high-profile examples, almost all the positive effects are outside public view. In internal company decisions, the benefits of appeasing the anti-Israel mob are weighed against the cost of losing government contracts. Anti-BDS laws even the playing field. A company might sacrifice their Israeli business to appease the mob. Losing 35 US states is a different proposition.

It has surfaced in Marrickville Council, the NSW Greens, Maritime Union of Australia and the sanctimonious Uniting Church.

BDS supporters inject toxic and divisive sentiment anywhere they can. From poisonous “Israeli Apartheid Weeks” that Jewish students are confronted with on campus, to picketing a gay film festival for daring to show a film produced by a Jew from Israel. Let’s not forget the ugly scenes outside Max Brenner, that spanned years.

BDS has clearly spread its tentacles down under. Instead of debating whether Australia has a BDS problem, we can prevent one. Look overseas at what can happen if we bury our heads in the sand. Few predicted an antisemite would come so close to ruling the UK. Jeremy Corbyn’s ascent to Labour leadership caught Britain’s Jewish community by surprise. The benefits of a protective framework cannot be overstated.

Another claim, that anti-BDS laws inhibit free speech, is patently false. The proposed law, already prepared by parliamentary drafters, has narrow application. The single constraint placed on individuals or businesses restricts eligibility for government contracts. Even then, a business owner could curse Zionists all day and fly a PLO flag from their shopfront and not impact eligibility.

A feature of the US legislation has been its bipartisan nature, often passing with overwhelming majorities. Australians, mostly decent people, will reject singling out Jewish products.

The window to act is narrow. The federal government has shown courage recently, adopting the IHRA Working Definition of antisemitism and proscribing Hezbollah as a terrorist organisation. Labor hasn’t taken issue with these steps, however we may face a less supportive environment come May.

AJA was advised the government will only advance this legislation if the Jewish community unites behind it. AJA has secured support from some organisations, but we are calling on all organisations to put aside their differences and partner with us. Let’s seize this opportunity to protect our community. If we fail to act now, we may end up wishing we’d been more proactive.

Robert Gregory is director of public affairs of the AJA