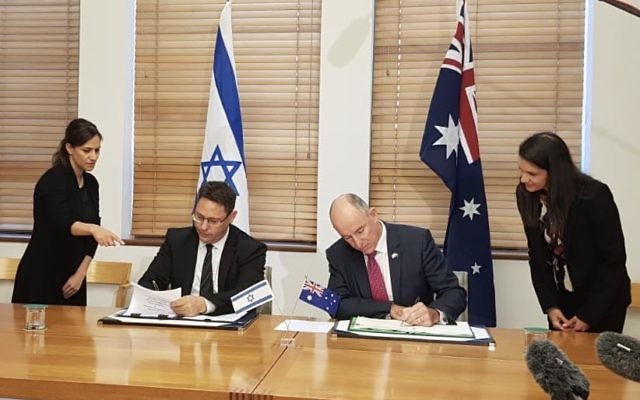 ON March 28, the governments of Australia and Israel signed a tax treaty. This is a key milestone in the relationship between the two countries, write Dr Niv Tadmore and Lauren Moses.

Tax treaties have two objectives. The first is about promoting business. They create more favourable conditions for trade and investment by preventing or reducing double taxation, capping rates of withholding taxes and alleviating compliance burden. The second is about targeting tax avoidance and evasion, mainly through stronger cooperation and exchange of information between the tax authorities of the two countries.

While tax treaties regulate tax issues, they are underpinned by a deeper message about the relationship between the two countries. As Australian Treasurer Josh Frydenberg MP and Australian Assistant Treasurer Stuart Robert said in a joint statement, “Australia and Israel share a close friendship and longstanding trade and investment ties. In 2017-18, total merchandise trade between Australia and Israel was worth over $1 billion, and Israel’s investment in Australia in 2017 was $301 million.”

In the same vein, Israeli Embassy spokesperson Eman Amasha said, “Australia and Israel share a flourishing trade relationship with 2018 seeing close to $1 billion worth of total trade between our markets … Overall, this agreement represents the strengthening trade ties between Israel and Australia and provides a platform for the further growth of business operations and investment cooperation in both markets.”

While Australia and Israel both have extensive tax treaty networks, this treaty has been floated as a notion for decades and has been a work in progress for many years. But better late than never.

This new treaty will first and foremost create better conditions for trade and investment related to technology.

For example, the enormous, diverse and ever-dynamic Israeli hi-tech market will be more accessible to Australian businesses by reducing the withholding tax rates on royalties. Whereas Australian businesses were previously required to withhold 30 per cent on royalty payments to Israeli entities, the treaty caps withholding at five per cent. Although withholding tax is technically a tax on the recipient of the royalty, it is common for contracts for the procurement of foreign IP to require payments to be grossed-up for withholding tax, so that in this case, the cost was borne by the Australian entity. This represents a significant reduction in the overall cost of doing business with Israeli companies.

The treaty also makes Australia a more attractive investment destination and a more viable launchpad or regional base for Israeli businesses looking to expand into Asia. Cross-border investment is further supported by capped withholding tax rates on interest and dividends. This will be a welcome boost following numerous listings by Israeli companies on the ASX in recent years.

The treaty also resolves a long-standing issue where an individual could be a tax resident in both Australia and Israel. This has had a major impact on olim and others who had strong ties with both countries. The treaty contains a “tie-breaker” aimed at resolving this issue. The rules are a little fuzzy but at least there is an end point where an individual can only be treated as a tax resident of Australia or Israel, not both.

Despite some hoping that it would, the treaty does not directly address the position of Australian trusts with Israeli potential beneficiaries. A complete overhaul of the Israeli system for the taxation of trusts with effect from 2014 exposed such trusts to the risk of being pulled into the Israeli tax net, regardless of whether or not distributions were actually made to Israeli residents. Whilst various steps can be taken to address this risk, uncertainty cannot always be eliminated entirely due to the broad language of the Israeli rules.

As to the other purpose of the treaty, preventing abuse, the new treaty is one of Australia’s most modern, incorporating key recommendations proposed by the OECD in recent years.

In addition, offshore assets and information sharing between governments has been a hot topic in recent years. The world has become smaller and more transparent, making it difficult and extremely risky to keep offshore assets a secret. This has prompted a wave of voluntary disclosures over the last five to 10 years. To that end, the new treaty provides mechanisms for the tax authorities of Australia and Israel to share information and there is nothing preventing them from requesting information relevant to periods before the treaty was signed.

The treaty also covers a range of other categories of income, including income and gains from real estate and other “immovable property” including mining, business profits, shipping and air transport, employment income, pension or superannuation funds and amounts derived by company directors, artists, sportspeople and professors.

The treaty will enter into force once both countries have completed their domestic requirements and instruments of ratification have been exchanged.