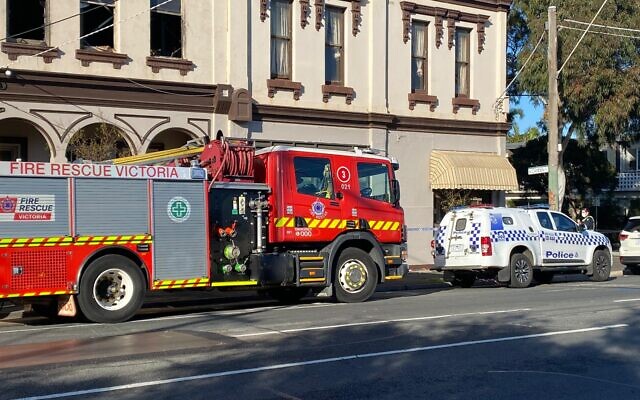 MONDAY night’s fire at Melbourne Kosher Butchers (MKB) in Balaclava was sparked by an electronic scale in the area where small goods are processed, and was not arson.

That’s the latest from owner Yaakov Unfanger, who called The AJN this morning to update the public on the store’s situation following the blaze which caused considerable damage.

MKB is currently selling meat from its freezer at its pie factory in the carpark around the back of the Balaclava Hotel.

They hope to be able to serve fresh meat after Simchat Torah.

A tearful Unfanger thanked the community for their support and said he was crying not through sadness but because he was so overwhelmed by the public response.

FRV crews were called to the Inkerman Street incident at 10.10pm after a caller to Triple Zero (000) reported the double storey premises filling with smoke.

Arriving in less than four minutes, firefighters entered the building and began an internal search to locate the source of the fire. Aerial appliances were also on scene assisting with access to the second storey of the building.

Attacking the flames from the inside, the fire was brought under control at 11pm, just over 40 minutes after the first crews arrived on scene.

No one was inside the shop at the time.