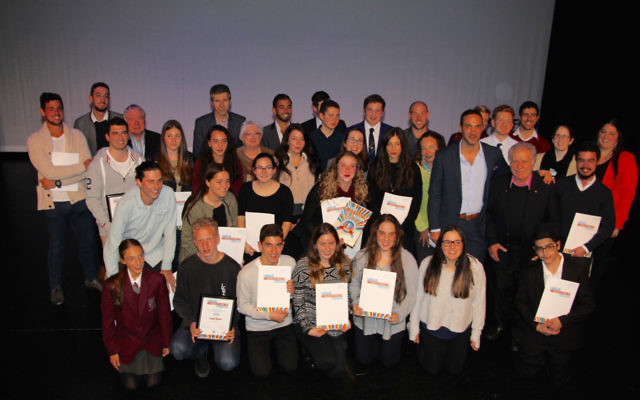 All together now: Winners, nominees and officials at the 2016 Jewish Changemaker Awards, held at Sydney's Emanuel School on July 31. Photo: Shane Desiatnik.

THEY are young, energetic and brimming with leadership potential, but most of all the 50 nominees and nine winners in the 2016 Jewish Changemaker Awards, held at Sydney’s Emanuel School on July 31, share a commitment of giving their time to help others.

The awards, an initiative of Jewish National Fund (JNF) of Australia and B’nai B’rith, were won by three Melburnians and six Sydneysiders in separate divisions of youth (ages 14 to 18) and young adults (ages 18 to 35).

Addressing the winners and nominees, JNF CEO Dan Springer said it was exciting to be in their presence “as you are still at the early stages of your communal endeavours, with fire in your bellies and passionate commitment to your various causes and ideas”.

“My wish is that you are able to maintain your passion, to stay grounded … to never forget why you got involved in the first place and, finally, to achieve positive change, known in the Jewish tradition as tikkun olam.”

Award winners for contribution to Australian society were (youth) Jacob Riesel and (young adults) Nicole Mekler, both from Sydney.

Melbourne’s Ezra Joel (youth) and Sharon Malecki (young adults) won the awards for contribution to the State of Israel.

The youth recipient of the JNF award for contribution to the Jewish community was Sydney’s Eli Grauman and there were joint winners in the young adults division – Michael Fisher from Melbourne and Jessica Newman from Sydney.

Ernie Friedlander – president of Moving Forward Together, an initiative of the B’nai B’rith Alfred Dreyfus Anti-Defamation Unit – congratulated all the winners and nominees, and stressed that the importance of the awards lies in “acknowledging the wonderful work our young volunteers have done – and I don’t think we can appreciate it enough”.

“They have done their giving to society in many aspects and ways, and they’ve sacrificed many other things [to do so],” Friedlander said.

Former award recipient Steve Ligoff offered the winners and nominees these words of inspiration: “See this as a sign that you are capable of so much more than you could ever imagine.”

Guest speaker, Stand Up chair Melanie Schwarz, described the -winners as “Bright stars in our -community”.