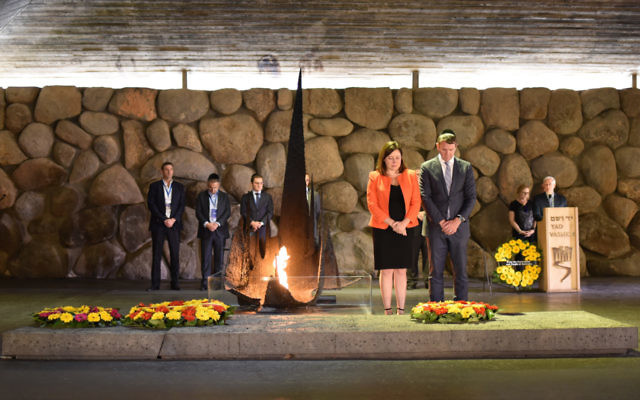 Mike and Kerryn Baird at Yad Vashem. Photo: Office of the NSW Premier

More than a quarter-of-an-hour after she welled up in the Hall of Names, there were still tears on her face. Then, a visit to the Children’s Memorial and a wreath laying in the Hall of Remembrance brought her emotions to the fore again.

Her husband Mike Baird, Premier of New South Wales, stood fixated by the guide during parts of their 90-minute tour of Yad Vashem — including a segment when they were taken to walk on original cobbles from the Warsaw Ghetto.

He admitted that the tour had drained him emotionally by the time he talked to The AJN at the end. “Nothing can prepare you for that,” he said.

Kerryn Baird nearly broke down again when asked for her thoughts. “What moved me the most was that these atrocities were conducted in daylight, and people stood and watched,” she said.

The Premier said that he connected with the Holocaust on a personal level at Yad Vashem, especially when hearing the story of the family of Australian philanthropist Frank Lowy, who he knows, and when seeing a display of victims’ shoes. “There was a red sandal that caught my eye and immediately I imagined a young girl like one of my daughters who innocently dreamed and laughed and played,” he said.

Baird was in Israel this week on the first trip to the country by a sitting NSW Premier. He spent part of the visit with just his wife and entourage, and part with a delegation of business, research and public sector leaders, which has been coordinated by the Australia-Israel Chamber of Commerce (AICC) and the NSW Jewish Board of Deputies (JBOD).

Aside from visiting the staple tourist sites of Israel, including the Old City, the Bairds spent most of  their time delving in to Israeli innovation, putting the emphasis of the trip firmly in the economic sphere. JBOD president Jeremy Spinak said that this will push new economic ties between NSW and Israel, and impact on the image of Israel in Australia. “People at home are starting to see Israel in its true light, as the ‘Start-up Nation,’” he said.

Baird described Israel as an “incredible nation” that is “leading the world in so many ways”.

Baird said he believes the trip will come to represent a “critical turning point” in relations between NSW and Israel, “going from being … allies and friends to significant collaborators and economic partners”.

There were meetings with start-ups and there was particular interest in cyber-security, with Andrew Scipione, commissioner of the NSW Police Force, joining the trip to focus on this.

One collaboration is already near to being signed. In the unlikely setting of a dilapidated Hebrew University building, the Premier and his entourage listened to a briefing on the institution’s cutting-edge research on medical cannabis, and moved close to preparing an agreement for Israeli-Australian cooperation in this field. Using an injection of public money the University of Sydney and University of New South Wales will innovate in medical cannabis using Hebrew University research.

“As I see it, it’s us providing basic scientific tools for clinical trials to be done in Australia,” said Hebrew University’s Yossi Tam, adding that the research agreement will be for five years, after which it will be renewed. Baird said that he is ready to “start tomorrow”. As well as going to Hebrew University he met Israel’s Health Minister Yaakov Litzman to discuss medical cannabis.

There was some politics during the trip, including a day in the West Bank which included a visit to a refugee camp that receives Australian aid money, and a meeting with Israel’s head of state. President Reuven Rivlin thanked Baird for Australia’s “strong position against extremism”, and said that the Israel-Australia friendship made him very disappointed to have to cancel a visit to Australia that he was meant to make last month.

A spiritual high-point of the trip for Baird, who has an academic background in theology, was visiting the Old City of Jerusalem, where he went to the Western Wall, ascended Temple Mount, and toured the Church of the Holy Sepulchre. It was, he said, “very remarkable” to see how close the sites of the different faiths are. He spent a few quiet moments at the Wall and he remarked afterwards that he found the place “very profound”.