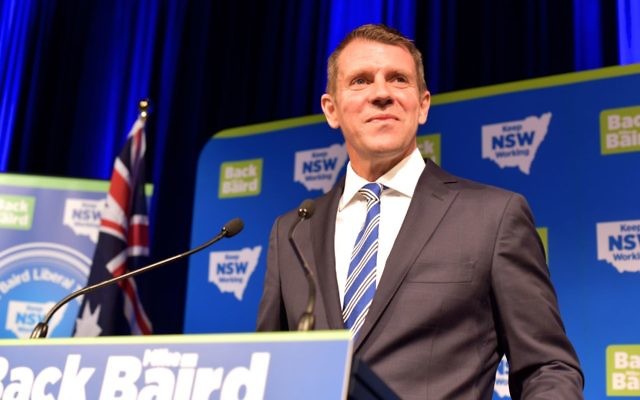 MIKE Baird has reaffirmed his commitment to become the first NSW Premier in living memory to visit Israel following his success in Saturday’s election.

“I intend to keep that pledge and look forward to continuing to strengthen the relationship between the Jewish community and the government over the next four years,” Baird told The AJN this week.

He made the pledge to lead a trade delegation to the Jewish State at State Parliament’s annual Yom Ha’atzmaut cocktail reception last year, saying: “No NSW premier has visited Israel this century. This is long enough.”

Congratulating Baird on his victory on behalf of the Jewish community, NSW Jewish Board of Deputies (JBOD) president Jeremy Spinak thanked the Premier and the state government for its “longstanding and staunch support of our community”.

“We look forward to working closely with them in the next term of government. In particular, we are eagerly awaiting the Premier’s visit to Israel in the coming term,” Spinak said.

He said JBOD also looks forward to working with Luke Foley as he continues as Opposition Leader.

“We are fortunate in that both leaders are good friends of our community and understand our concerns across a range of issues,” Spinak added.

Meanwhile, Member for Vaucluse Gabrielle Upton, whose electorate has the largest Jewish population in NSW, with 15,771 Jews, comfortably retained her seat, as did Member for Davidson Jonathan O’Dea.

Member for Coogee Bruce Notley-Smith, who contested former member Paul Pearce, defied an 8.5 per cent statewide swing to Labor to retain the seat with a two-party preferred vote of 52.5 per cent.

“I cherish the strong relationship I have built with our wonderful local Jewish community and I will continue to build on this friendship,” he told The AJN.

Notley-Smith, whose electorate includes Moriah College and Emanuel School, added: “I will keep working with Premier Mike Baird to ensure our entire community has the safety and security to get on with their lives; to work, to learn, to worship and to raise a family in peace.”

Premier Mike Baird during his victory speech on election night.