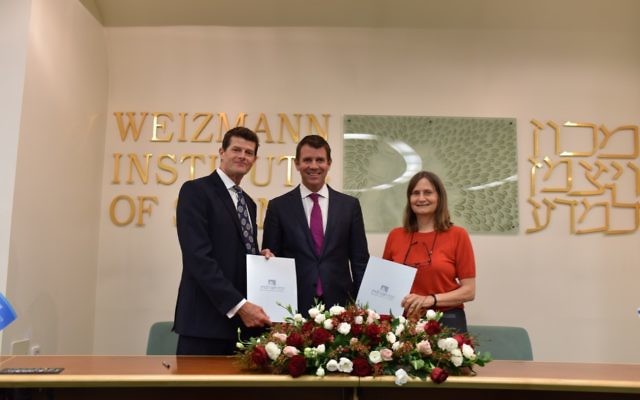 As well as the general R&D deals, there are new agreements that will harness Israeli methods for making the desert bloom in order to drive NSW agriculture and get Australians using Israeli medical research to fight cancer and other ­diseases.

The agreements were reached during the Israel visit of NSW Premier Mike Baird last week. “It was one of the most outcome-rich trips I have seen in my time here,” Australia’s ambassador in Israel Dave Sharma told The AJN, saying that it provides a “political platform for cooperation”.

The Australia-Israel Chamber of Commerce considers the visit a “game-changer” and “an upgrade of NSW relations with Israel”. Talking to The AJN the chamber’s executive director Paul Israel commented: “This was the most results-oriented mission we ever hosted.”

Baird’s time in Israel was predominantly spent dashing from meeting to meeting, mostly related to collaborations in industry and research. Even his brief visit to the beach had a theme of Israel-Australia cooperation. He supports the Israeli Nipper program – the beach-safety initiative that was imported to Israel last year – from afar, serving as patron of its supporters back in Australia. In Israel he went to see children studying on the program.

The biggest agreement of the trip, the general R&D deal, helps companies from Israel and NSW that want to cooperate on bringing innovative produces and services with a global appeal to market. It is not yet known how much money NSW will be allocating. In terms of the Israeli money, NSW companies will now be like companies from dozens of other states, including Victoria, which have formal collaborations with Israel, and are able to draw from an annual research fund of $650 million.

“Historically, Victoria has been in the lead in relations with Israel in high-tech and innovation,” said Sharma. “With this trip NSW has caught up.”

The R&D agreement will boost cooperation across industries but especially in water management, agricultural technology and cybersecurity. Avi Luvton of the Israel Innovation Authority said at the signing: “We are proud to share our best practices as the ‘Start-up Nation.’”

After ratifying this and other agreements Baird departed from Israel optimistic about the understandings that he reached. “I want to make NSW the ‘start-up state’, and this week we have helped this goal by engaging and establishing formal partnerships between our businesses, universities, researchers, and their counterparts in Israel,” he said.

“Israel is one of the world’s most innovative economies, and by creating a new corridor between Israel and ourselves – on issues such as cybersecurity, financial and medical technologies, and innovation – we can increase NSW’s competitiveness in the future digital economy.”

A special agricultural agreement means that NSW is due to learn from Israel’s experience making the country flourish despite its dry conditions. Given the similarly arid climates, it “makes sense to share knowledge, expertise and innovative research”, Baird said.

The agreement took the form of a memorandum of understanding between the University of Sydney and the Agricultural Research Organisation of Israel, which is intended to help dairy, poultry and aquaculture in NSW, chiefly by drawing on Israeli expertise through teaching, training and research activities.

Baird visited several companies including Elbit, the defence electronics experts, that are providing technology that NSW will repurpose from defence to medicine. The Royal Flying Doctor Service South Eastern is going to be able to train more effectively when a newly ordered Israeli flight simulator is in place at its Dubbo base.

On the medical front, a key collaboration between Israel and NSW will focus on trying to diagnose and treat diseases, including cancer and autoimmune conditions, by examining differences in genetic sequence and gene expression between individual human cells.

This field is called cellular genomics, and Baird announced the establishment of Australia’s only multidisciplinary facility to research the field – a partnership with Israel’s Weizmann Institute.

The Garvan-Weizmann Centre for Cellular Genomics will be based at Darlinghurst’s Kinghorn Cancer Centre, and employ more than 50 researchers. Baird said that it will be “a bridge between these two innovative and world leading research bodies”.

Michal Neeman, vice-president of the Weizmann Institute, said that this field can lead to “new insights into the mechanisms of disease that, before single-cell approaches came of age, simply couldn’t be unlocked”.

Stephen Chipkin, chairman of Weizmann Australia, said that the partnership “builds a significant bridge between Israel and Australia and will be of great scientific value, for the benefit of all humankind”.