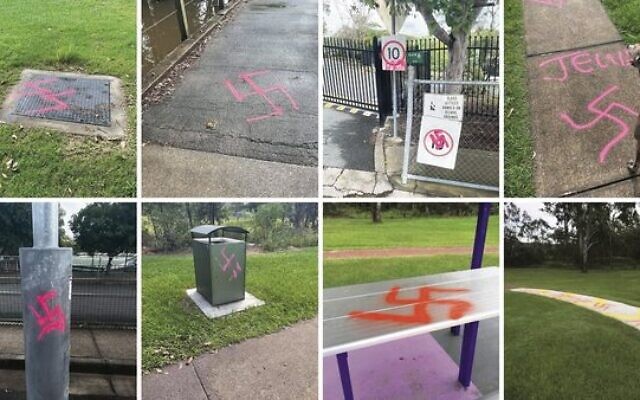 NEW South Wales will become the first state or territory in Australia to formally consider and debate a prohibition on the public display of Nazi symbols after a parliamentary inquiry last week unanimously backed the proposal.

This was a historic recommendation on the back of an unprecedented set of public hearings, in which the NSW Jewish Board of Deputies (JBD) and the Hindu Council of Australia, together with other Jewish groups, urged the NSW government to declare that the Nazi swastika has no place in our state.

Just days after the inquiry’s participants expressed “strong support” for the bill’s protective objectives, antisemitic vandals in Victoria targeted federal Jewish Labor MP Josh Burns, daubing a Nazi swastika and Hitler moustache over a poster of the Member for Macnamara.

In Sydney, meanwhile, a swastika and the words “Heil Hitler” were recently sprayed on a wall in Randwick, and a traffic pole in Bondi, just metres from Yeshiva College, was also scrawled with the Nazi symbol.

As Holocaust survivor Joseph Symon told the parliamentary inquiry, seeing such symbols on our shores was “very disturbing” for Jews and others killed in concentration camps.

“The swastika is a very vivid reminder of hatred, senseless loss of life of millions of people, Jewish and non-Jewish, and the murder of my father,” Symon lamented.

“When I see a swastika in Australia it brings forward all the cruelty that people lived through and it also helps the extreme right-wing and neo-Nazis push their agenda.”

It is for this reason that the JBD is calling for legislation banning the public display of Nazi symbols in NSW, and indeed, across Australia.

How, and why, did we get to this point? A symbol of peace for thousands of years, the Nazi regime manipulated the Hindu swastika into the Hakenkreuz – the hooked cross – which resembles the Hindu swastika, and used it as a propaganda tool across the world to intimidate, train and enlist followers and impose hate, suffering and death on millions of people. And now we see the re-emergence of these symbols for the same purposes.

Surinder Jain, national vice-president of the Hindu Council of Australia, described the use of the Nazi swastika as “evil” and said greater education in our schools “explaining the difference between the peaceful swastika and hateful Hakenkreuz” was needed.

“Jews were persecuted in Europe and this symbol raises fear and hate. Hindus, Jains and Buddhists have also suffered then and since. Our sacred symbol of the swastika representing peace and prosperity is often confused with the evil Hakenkreuz. Since the Second World War, we are not able to display our symbol in public without raising scorn,” he said.

“We hope that this legislation will ban the hate symbol while freeing our sacred symbol from indoor imprisonment.”

Under the proposed law, the maximum penalty for an individual flouting the ban would be a $5500 fine or imprisonment for six months or both. There are specific exceptions for the Hindu swastika and for using the Nazi swastika for educational purposes.

This legislation is for all the people of Australia; it is important for community harmony and to combat hatred and oppression of minority groups.

After all, fighting hate, racism, intimidation, and provocation of all people is our collective responsibility.

The further away we get from the Holocaust, the more important it becomes to remember our history and fight against those who wish to cause us harm, to undermine our multicultural state and the values and strengths we all have in an inclusive state.

A recent national survey led by Deakin University researchers found almost a quarter of Australians aged 18 or older have little to no knowledge of the Holocaust.

One in four Australians could not identify basic facts about the Shoah such as the six million Jews murdered, that the Final Solution was the pursuit of the elimination of Jewish people and that Hitler rose to power through a democratic election.

This is despite Australia, arguably the most multicultural nation in the world, having one of the largest per capita number of Holocaust survivors in the world.

Normalisation of the use of the Nazi symbols is a key step to forgetting the horrors of the ethnic cleansing, the attempt to remove an entire group of peoples from this earth for eternity. And forgetting is the first step to this being repeated.

These symbols represent the dehumanisation of millions of people; the death of our Australian servicemen and women; and one of the most inhumane, hate-based and murderous regimes and ideologies to ever exist.

Concerningly, they are also being used as recruitment tools both in-person and online. There have been recent media coverage outlining the rise in right-wing extremism and the use of these symbols to embolden and recruit those to their cause.

Those who are being recruited can often be the most vulnerable. We should be protecting those that are vulnerable in our community from this propaganda.

Legislation like this will ensure we do not forget the lessons of history, and how they can be used to bring out the worst in our society. If a picture tells the story of a thousand words, then a Nazi symbol is a 1000 words of hate speech.

History is teaching us that now is the time to act. Let us join the 12 countries and nations around the world that have taken this action. Let’s curtail the recruitment. Let’s learn the lessons of history.

Darren Bark is the chief executive officer of the NSW Jewish Board of Deputies.