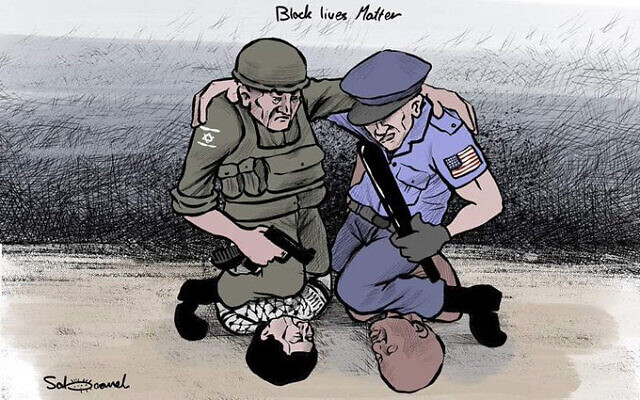 A cartoon comparing the killing of George Floyd to Israel’s treatment of the Palestinians.

ANTI-Israel groups in the US have come under fire for linking the police killing of George Floyd in Minneapolis to the IDF’s treatment of Palestinians.

The 46-year-old unarmed African American man died last week after an officer knelt on his neck and refused to get off, despite Floyd’s protests that he could not breathe.

Responding to the killing, which has sparked demonstrations and riots across America, the Jewish Journal reported that pro-boycott, divestment and sanctions (BDS) organisation the US Campaign for Palestinian Rights (USCPR) had quoted an Amnesty International article claiming a number of American police departments are trained in Israel. 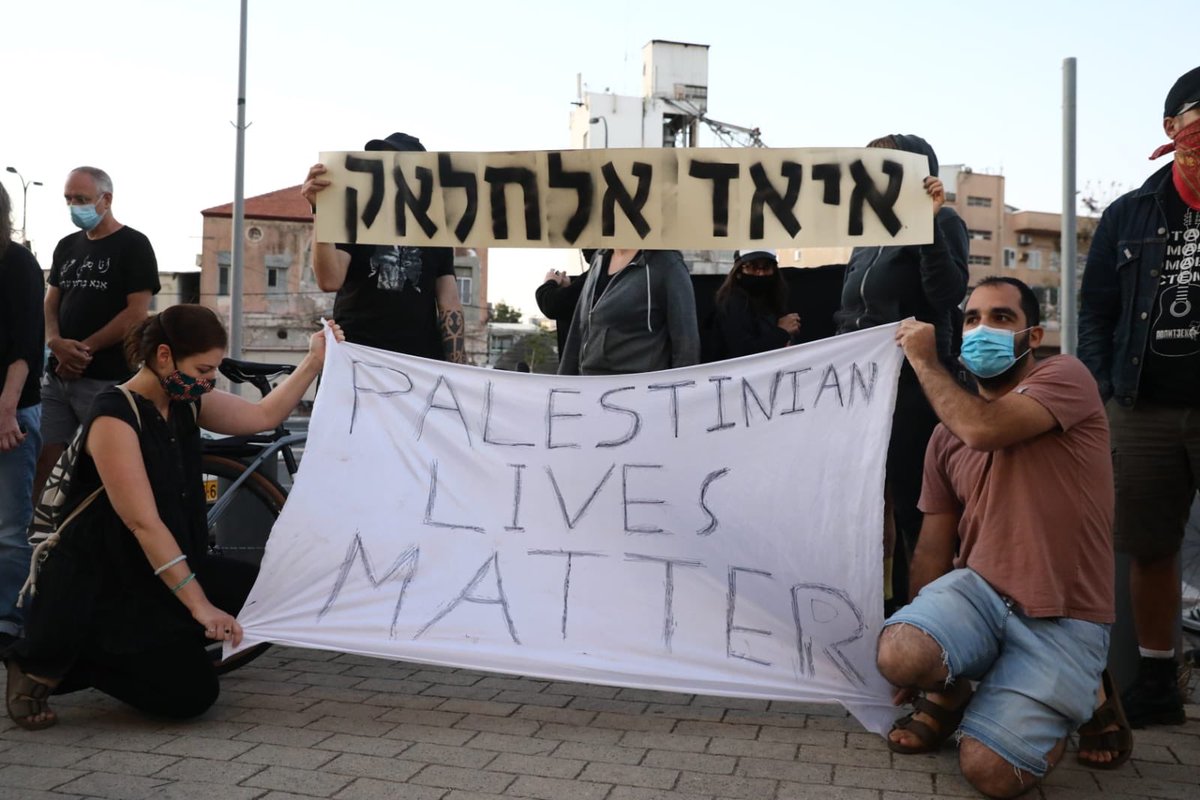 The USCPR, which represents pro-BDS groups across the country and which has more than 50,000 Twitter followers, tweeted, “The Israeli military trains US police in racist and repressive policing tactics, which systematically targets black and brown bodies.”

Referring also to the deaths of other black Americans, the body which describes Zionism as “a political system that privileges the rights of Jews over the rights of others”, continued, “The recent murders of George Floyd, Breonna Taylor, and Ahmaud Arbery are examples of racialised, systematised violence.”

Responding to the USCPR claims, former member of Knesset Einat Wilf tweeted, “Ah yes, of course. Because there is absolutely nothing in American history to explain police brutality against black men.

“It has to somehow involve Israel. I thought only Palestinians lacked agency, now American cops lack it too – their actions determined by Zionist puppeteers.” 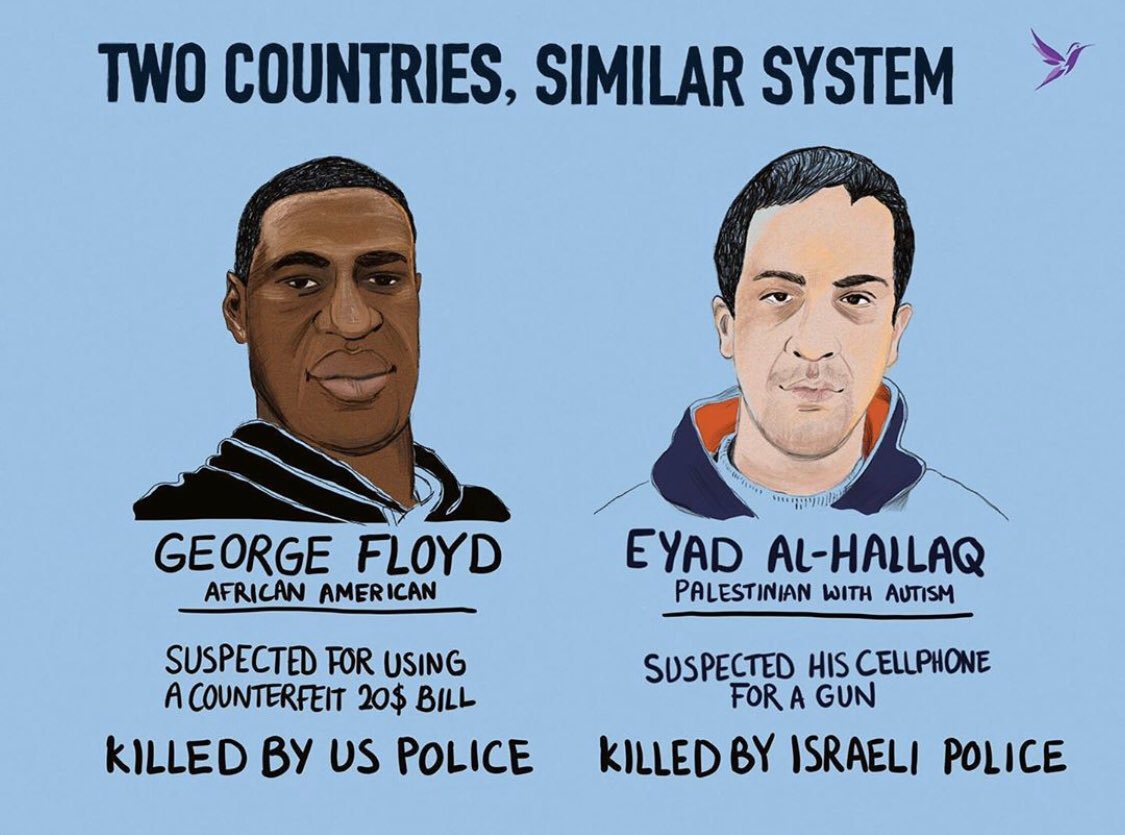 The USCPR, though, was not the only group to point the finger at Israel in the wake of Floyd’s killing.

The Algemeiner reported that the Democratic Socialists of America’s BDS national working group responded to the ensuing clashes stating that “US cops train in Israel” and that the “police violence happening tonight in Minneapolis is straight out of the IDF playbook”.

It added, “The racist and brutal tactics used by Israeli military and US cops are purposefully one and the same.

“So-called ‘less lethal’ weapons like tear gas are manufactured in the US and sold to Israel where they are tested and used on Palestinians.”

The group continued, “Surveillance tech is made in Israel and brought to the US to invade the privacy of black, brown, Muslim, poor, and otherwise marginalised people.”

B’nai B’rith International hit back at the claims, telling The Algemeiner, “This is a case of exploiting the tragic and tense situation in Minneapolis to advance the motives of the BDS movement to demean and delegitimise Israel.” 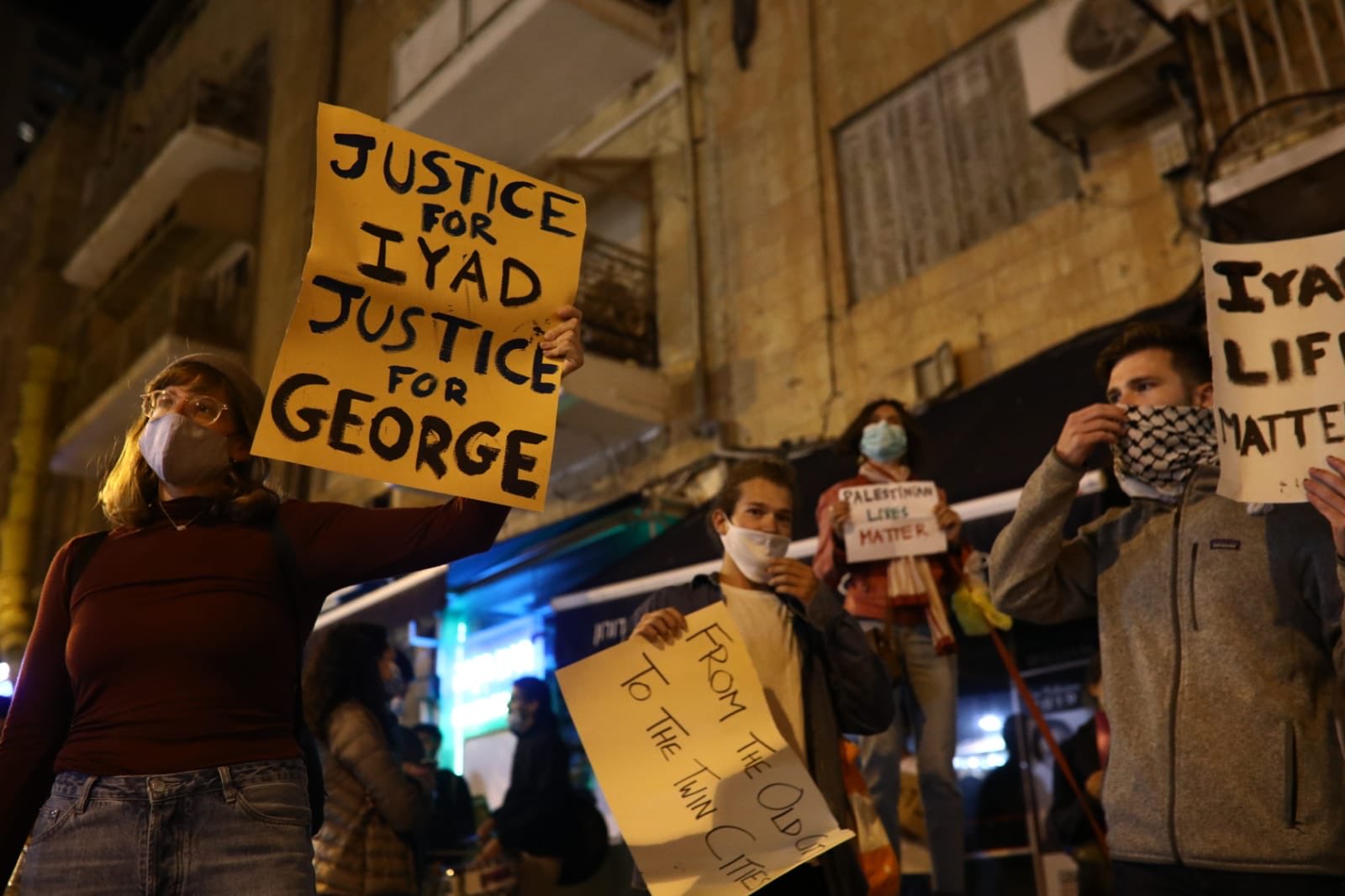 He added, “We Jews know all about antisemites connecting non-existent dots to denigrate our people.”

Meanwhile, a synagogue in Los Angeles was vandalised with graffiti reading “F**k Israel” and “Free Palestine” as protests against Floyd’s killing swept the city. The graffiti was spray-painted on the walls of Congregation Beth Israel in the Fairfax district, the Jewish Journal reported. Amid particularly intense protests in the district, several Jewish businesses and restaurants were damaged and looted, Haaretz reported.

Several synagogues in Los Angeles were vandalised with antisemitic graffiti over Saturday, including Kehillas Yaakov, a storefront shule, Hamodia reported.

Elsewhere, video posted on Twitter by a college journalist showed a brick thrown by a protester through the window of Congregation Beth Ahabah, a more than 200-year-old Reform congregation in Richmond, Virginia, during Saturday night protests.