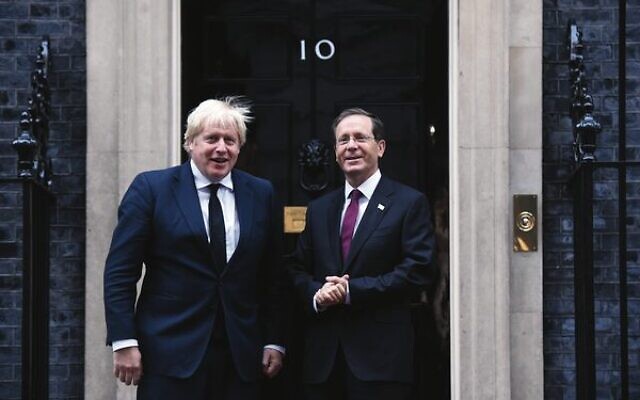 ISRAELI President Isaac Herzog urged British Prime Minister Boris Johnson to take a hard line against Iran in talks aimed at reviving the 2015 nuclear accord during a meeting between the two leaders in London last week.

Herzog said Israel needed its allies to firmly oppose Iran’s nuclear ambitions, as the P5+1 group of world powers prepare to restart negotiations in Vienna next week aimed at reviving the multilateral nuclear accord they signed in 2015.

“We are looking forward for our allies in the P5+1 to be as tough as possible because we do not believe that they [the Islamic Republic] are operating in a bona fide manner, and only if all options are on the table may things move in the right direction,” said Herzog.

Johnson warned that “the world doesn’t have much time” on Iran, echoing concerns by leaders in Israel and the West over Tehran’s rapidly-mounting uranium stockpile amid moribund nuclear negotiations.

Israel is opposed to the US returning to the tattered nuclear accord, but has also sought to press for more safeguards and curbs on Iranian actions should an agreement take shape.

Herzog also thanked Johnson for the UK’s decision to proscribe the political wing as well as the military wing of Hamas as a terror group.

“This is a very important message to terror organisations and global radicals trying to undermine the situation in the Middle East,” said Herzog.

Johnson concurred, noting the fatal shooting of Eli Kay in Jerusalem on Sunday. “It was a difficult and controversial decision but I think the right thing, a decision that was almost immediately vindicated by the appalling incident that we saw in Israel.”

Herzog also praised Johnson for his “moral clarity when it comes to Israel and the Jewish people and fighting antisemitism”.

In addition to the Prime Minister and other politicians, during the trip Herzog met with Jewish communal leaders as well as Prince Charles for a discussion centred on climate change, regional threats and Holocaust education.