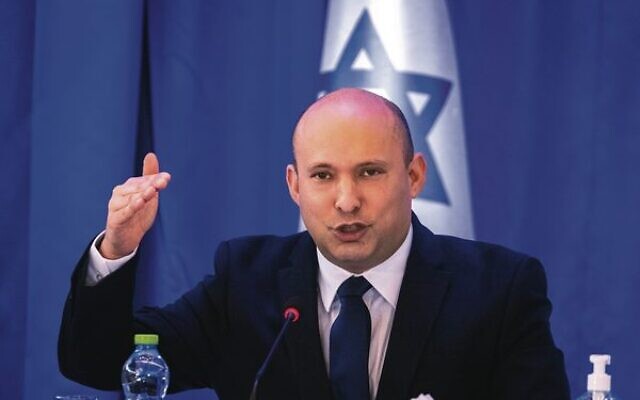 Former prime minister of Israel Naftali Bennett will be the guest of honour at UIA Australia’s 2023 campaign gala events across the country.

The speaking tour of Sydney, Melbourne and Perth will be one of Bennett’s first engagements since leaving his prime ministerial duties.

Bennett served as Israel’s 13th prime minister from June 2021 until June this year. His Yamina faction was part of Israel’s broad governing coalition – the first to include an Arab party – that despite its collapse was lauded for a host of political achievements. He announced he would not seek re-election to the Knesset on June 29.

UIA president Esther Frenkiel said the organisation “is privileged to present a guest of this calibre”.

“We are honoured to have former prime minister of Israel Naftali Bennett to launch our 2023 campaign and spearhead our celebration of Israel’s 75th anniversary,” Frenkiel said.

“His presence at our gala events … is a wonderful testament to the exceptional position that Keren Hayesod-UIA holds in the Jewish world.

“We encourage our community around Australia to share this milestone with us as we will also be joined by the talented IDF ensemble to give the events an incredibly festive feel.”

Bennett’s previous positions include minister of defence, minister of education, minister of Diaspora affairs and minister of economy. He was leader of the Jewish Home party (2012-2018) and the New Right party – part of Yamina – (2018-2022).

As prime minister during the outbreak of the war in Ukraine, Frenkiel said of Bennett, “There is nobody better placed to reflect on the impact of Keren Hayesod – UIA’s lifesaving work this year.

“With over 60,000 olim expected in Israel in 2022, KH-UIA together with the Jewish Agency for Israel are the key partners with the government in assisting with the aliyah and absorption of those olim, and ensuring they have a brighter future,” she said.

Bennett thanked Keren Hayesod for its work with Ukrainian Jews in a letter to it, the Jewish Agency and the Jewish Federations of North America on March 8 this year.

He said the organisations “have always supported their brothers and sisters around the world whenever there has been a need, and I am proud that now there is also an independent Jewish state that can join you in taking responsibility for our fellow Jews”.

In a video message to the Zionist Federation of Australia’s plenary conference last November, Bennett praised the Australian Jewish community.

“Australia’s Jewish community has a long history of steadfast support for Israel. Your thriving community has always been at the forefront of pro-Israel action,” he said.

“Your passion, dedication, and unwavering support for the State of Israel is greatly felt and greatly appreciated. When I visited Australia a few years ago, I got to see all of this firsthand and I found it truly inspiring.”

He described Israel as “a lighthouse in a storm”.

“We stand tall and we spread our light across the world. My friends, your support and your love for Israel adds to that light.”

Bennett made an official visit to Australia in 2013 while minister of economy, Jerusalem and Diaspora affairs as part of a coalition under Benjamin Netanyahu, who is set to return to the prime ministership after Israel’s recent election.

Meanwhile, UIA Victoria held its annual general meeting and 2023 campaign launch at Central Shule last Thursday, November 17. The AGM focused on the impact UIA Australia is having in Israel, including resettling thousands of Ukrainian refugees as well as immigrants from Russia.

Grundwerg said that prior to the COVID pandemic, there were around 30,000 new immigrants to Israel per year, but that had doubled in 2022 – a number which includes around 15,000 arrivals from Ukraine and 32,000 from Russia and Belarus.

Lowy said that having travelled to Ukraine and Poland with Grundwerg in April to help support Ukrainians seeking refuge in Israel, he was struck by the relevance of UIA’s work despite being an organisation that is 102 years old.

The AGM also marked the succession of the UIA Victoria presidency from Hayley Southwick to Peter Horovitz.

“A good leader knows when it is time to pass on the baton. While I feel sadness, I am also filled with immense pride,” Southwick said.

“My five years as president and 10 as Women’s Division chair … have by far been one of my greatest experiences – simultaneously fulfilling, rewarding and challenging.”

Grundwerg and Lowy presented Southwick with the prestigious “Key to Jerusalem” award in recognition of her support to the State of Israel and the Jewish people.

Incoming president Horovitz stated, “I am a proud Australian, a proud Jew and a staunch Zionist, so I am immensely honoured to have been asked to take on this role – a role I take very seriously.”

The AGM also launched a rebrand for UIA, which it believes will ensure a consistent image and message nationally.

Bennett will feature at UIA’s General Division and Young Leadership events on Sunday, February 26 in Sydney and Tuesday, February 28. Bookings will open soon. Follow UIA on Facebook and Instagram to stay updated on the 2023 campaign events.