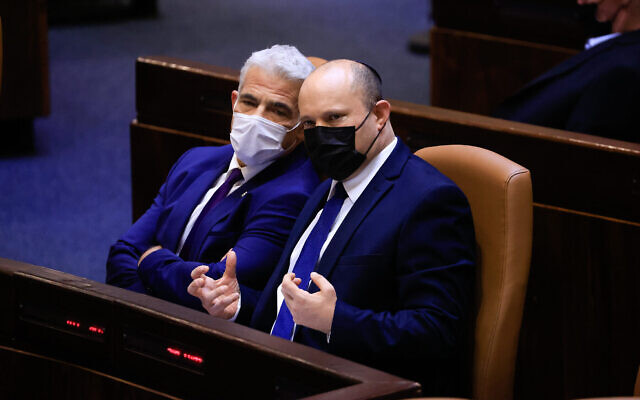 During a recent private conversation, Prime Minister Naftali Bennett reportedly said that he doesn’t expect his current power-sharing government to last until August 2023, when Foreign Minister Yair Lapid is expected to become premier as part of a rotation agreement.

“I estimate that the rotation will not happen,” Channel 12 news quoted Bennett as saying. “There is a considerable chance that the government will dissolve between the [passage of the] budget and the time of the change of power, for various reasons.”

The television network said Bennett made the comments in the past month during what it described as a closed meeting.

Commenting on the report, Bennett’s office appeared to confirm the details, but stressed Bennett “will fully honour the rotation deal, as he has been saying from the get-go.

“The partnership with Alternate Prime Minister and Foreign Minister Yair Lapid is based on mutual trust and fairness,” the response added. “Ahead of the passage of the budget, which guarantees the stability of the government, there are predictable reports of various quotes from various times that were only said as estimations.

“The budget will pass and the partnership will continue.”

“The recent reports don’t reflect my position and definitely not my commitment to this agreement. We shook hands,” Bennett wrote on his personal Twitter account.

Lapid said he spoke Thursday evening with Bennett and dismissed what he called “transparent efforts” to divide them.

“It won’t happen. Both the prime minister and I have one goal: To pass the budget and strengthen the government,” Lapid tweeted.

The report came amid increased tensions in the diverse ruling coalition, and a day after the same news outlet quoted a close political ally of Bennett, Ayelet Shaked, questioning whether his Yamina party will honour the rotation that would see Lapid take over as prime minister in 2023.

The public infighting in the coalition — which is made up of right-wing, left-wing and centrist parties, as well as an Islamist one — must pass a 2021 budget by November 14, and Bennett and other ministers have warned against rocking the boat in the run-up to that vote.

If the much-delayed budget — it would be the first state budget to be approved in over three years — does not pass by the deadline, the coalition will automatically dissolve, triggering new elections.

The coalition, will need all of its lawmakers on board to approve the budget, which earlier Thursday the Knesset Finance Committee approved for its final plenum readings.

In recent weeks, coalition lawmakers have expressed increasing optimism regarding their chances of passing a budget, with no one in the narrow, 61-seat government interested in another election, despite the various ideological differences between them.