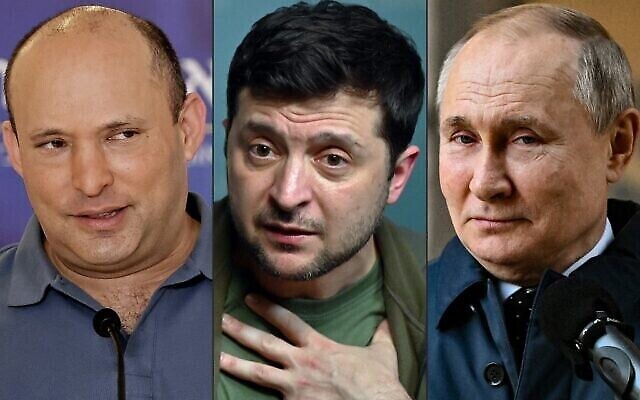 The call with Putin lasted for roughly an hour and a half, during which the two men discussed efforts to reach a ceasefire in Ukraine, as well as efforts to allow access to Israeli humanitarian aid, a diplomatic official told reporters.

The official said Putin complained to Bennett about the “barbaric” acts of Ukrainian soldiers in the separatist-held Donetsk region in eastern Ukraine, where Russia claims 20 civilians were killed. Those reports remain unconfirmed.

A statement from the Kremlin carried by Russian news agencies said Putin shared with Bennett his “assessments” on the negotiation process with Ukraine.

Bennett last spoke with Putin on March 6, a day after the two met in Moscow.

Bennett’s trip was seen as an effort to further develop Bennett’s potential role as a mediator between the sides, as Israel has good relations with both Kyiv and Moscow. 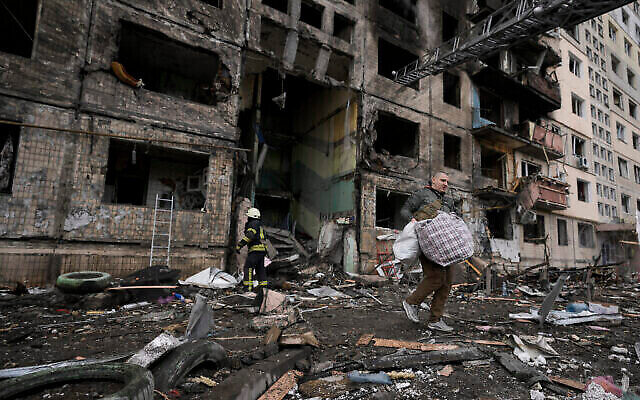 A local resident searches for his belongings in an apartment building after it was hit by artillery shelling in Kyiv, Ukraine. Photo: AP Photo/Vadim Ghirda

Bennett has also spoken with Zelensky multiple times since Moscow’s troops invaded Ukraine, though the two men have not met in person.

In a tweet Monday, Zelensky said, “We exchanged information on our joint steps and steps of our partners against the background of Russian aggression. Agreed on further actions.”

There was no immediate statement from Bennett’s office on either call.

During Monday’s cabinet meeting, Bennett said Israel was managing its response to Russia’s war on Ukraine with “sensitivity and responsibility,” pushing back against criticism over the fact that Jerusalem has failed to take stronger action against Moscow over the invasion of its neighbour.

“We are managing this complex crisis with sensitivity and responsibility, and are making an effort to offer assistance however we can,” Bennett said.

Details of Israel’s mediation efforts have remained obscure. Saturday saw a top adviser to Zelensky deny a report that Israel had pushed the Ukrainian leader to accept an offer from Putin that would see Ukraine make significant concessions to end Russia’s invasion.

Israeli officials have indicated that Jerusalem has not taken a position, nor has it brought forward a proposal for a ceasefire. Rather, they assert that Bennett’s role has been to clarify the two sides’ positions to each other and to other global players, thanks to Israel’s good relations with both nations.

Zelensky suggested on Saturday that negotiations between Ukraine and Russia to end the war could be held in Jerusalem, but the prospect of Israel’s capital hosting a summit for negotiators remains particularly low after Monday’s call with Putin, [Israel’s] Channel 12 reported.

Though Israel has long had good relations with both Ukraine and Russia, its relationship with Kyiv has been strained because Bennett has avoided directly blaming Russia for the war, although Foreign Minister Yair Lapid has done so.

Ukraine has repeatedly pushed Israel for more support since Russia launched its invasion. But Israel has been seeking to avoid antagonizing Russia, which has a strong presence in Syria, where Israel carries out military action against Iran-linked groups.

Times of Israel staff contributed to this report.