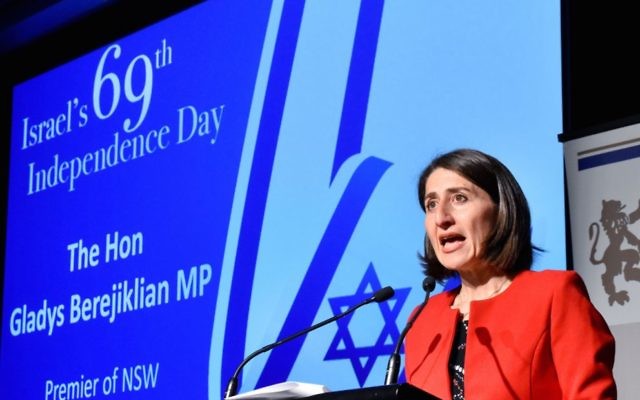 NSW Premier Gladys Berejiklian proposed a toast to the State of Israel at a communal Yom Ha’atzmaut function on Tuesday night (May 2).

“We join together to particularly recognise the importance of a proclamation made on May 14, 1948, declaring the establishment of the State of Israel,” Berejiklian said at her first official address to the Jewish community since becoming Premier.

“Two millennia of exile forced upon a nation was over, and Herzl’s dream and the dream of the Jewish people was finally complete.”

She went on to recognise the achievements of modern Israel, reflecting on the friendship between Israel and Australia and the success of the Sydney Jewish community.

She also noted that her predecessor Mike Baird was the first sitting NSW premier to visit Israel, and hinted that he won’t be the last.

“I think it’s fair to say that NSW is the great state that it is thanks to the incredible contributions made by the Jewish community over the decades, alongside so many other communities,” Berejiklian said, before raising a glass to the State of Israel and saying, “L’chaim – to life.”

The event at the Shangri La Hotel, which saw politicians from both sides of politics including Opposition Leader Luke Foley, communal leaders and stalwarts of the community come together, was also the last Yom Ha’atzmaut function for Israeli ambassador to Australia Shmuel Ben-Shmuel before he returns to Israel.

“Israel’s Independence Day celebrates a double miracle in the life of the Jewish people,” Ben-Shmuel said.

“The first miracle is the restoration and Jewish sovereignty … The second miracle is what we have done since the establishment of the Jewish State.”

Ben-Shmuel praised Israel’s innovation and creativity in the areas of science, technology, medicine and the arts, which he said promises a great future for Israel and is a testament to the Jewish people.

This year has been designated a jubilee year in Israel; it is the 50th anniversary of the reunification of Jerusalem, a century since the Balfour Declaration and 70 years since Australia was the first to vote yes in the Partition Plan – making Australia “the midwife present at Israel’s birth”, Ben-Shmuel said.

“It brings me great pride to celebrate Israeli independence among such friends, among those who have long stood beside us,” the ambassador concluded, wishing the community, “Yom Ha’atzmaut sameach.”