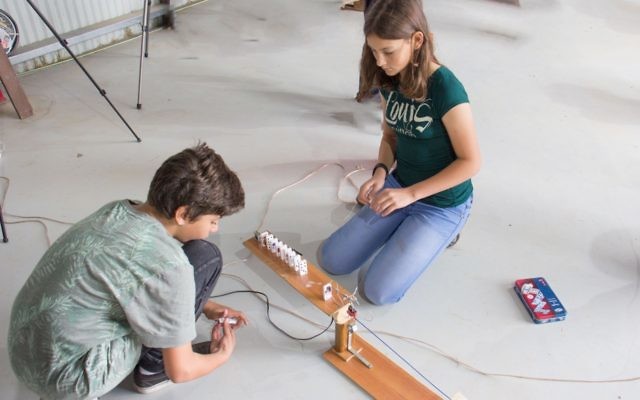 Students Jamie Sobol (left) and Alexandra Patishman hard at work on their machine.

A TEAM of four year 7 students at Bialik College have won joint first place in the middle school division of the first ever Technion Jewish Day School Challenge.

For the challenge, a collaboration between RAVSAK (The Jewish Community Day School Network in North America) and the Technion Department of Mechanical Engineering in Israel, students were asked to create a Pesach-themed Rube Goldberg machine.

A Rube Goldberg machine is a contraption that is deliberately over-engineered to perform a simple task in a complicated fashion, generally including a chain reaction.

More than 600 students from 41 Jewish schools, located in Europe, North America, Australia and Africa, participated in the challenge.

Bialik tied with a year 6 team from Scheck Hillel Community School in North Miami Beach, Florida. Both teams will receive a 3D printer for their school.

The Bialik students – Daniel Kazakevich, Leon Paratz, Alexandra Patishman and Jamie Sobol – created an intricate machine that included a farm tractor and heat-filled balloons. The contraption covered each of the Ten Plagues, before revealing a seder plate at the end.

Sobol said he was “really happy” to have won, although he was “stunned” when the team first heard the news.

“We put a lot of effort into it and I was hoping we would win,” Sobol told The AJN.

He added the process of building the machine was a lot of fun. “I was really proud that we managed to do it in the little time we had,” he said.

“To be awarded first place in this international Haifa Technion competition is a wonderful accolade for our creative students, supportive parents and visionary staff,” Stowe-Lindner said.

“The merging of STEM (Science, Technology and Maths) with Pesach in this competition articulates the Bialik vision of what it is to be high achieving and Jewishly literate.”

Technion president Professor Peretz Lavie congratulated all participants and said the Technion is thrilled to have launched this new ­initiative.

“In an ever-changing world we need to find new and relevant ways to connect younger generations of the Jewish people with Israel. What better way to do so than a thought-provoking, fun competition that has a strong STEM education focus,” Lavie said.