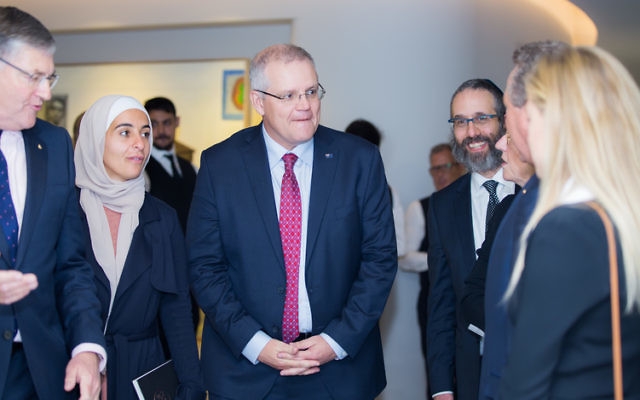 “Prime Minister Netanyahu invited his Australian counterpart and his wife to visit Israel and its capital, Jerusalem.

“The leaders emphasised the excellent relations and deep friendship between the Israeli and the Australian governments and peoples, and agreed to work to further strengthen security and economic relations.”

Turnbull told The AJN last week that the Morrison government “will be as strong a friend and a supporter of Israel as mine was”.

The Jerusalem Post last week speculated that “some officials believe that with a new prime minister, there may be a chance to get Australia’s policy on Iran more in line with that of the US … and even to put on the agenda the possibility of moving Australia’s embassy to Jerusalem”, however The AJN understands there are no plans on either front.

One of the new Prime Minister’s first local engagements was keeping a prior commitment to attend a Together for Humanity boardroom lunch at Clayton Utz in Sydney last week.

The organisation, which was founded in 2002 by Rabbi Zalman Kastel, promotes interfaith and intercultural understanding amongst school students.

Rabbi Kastel, who also serves as national director, told The AJN that Morrison was a longtime supporter and committed to attend “a while back” while still Treasurer.

“We were not optimistic that he would follow through, given he was going to Indonesia that night,” he said.

“But he was able to fit it in because it was important to him. I was thrilled and I think a lot of the other guests were very pleasantly surprised that he was able to keep his commitment.”

The theme of the lunch was “Social Cohesion in Action” and Rabbi Kastel said the Prime Minister was invited to “reflect on his own effort in engaging with people outside his own faith”.

“It’s reassuring that the new Prime Minister, within a week of taking on that role, has shown by his choice of attendance that getting to know our neighbours is important,” Rabbi Kastel said.

“He’s embraced people of various faiths and shown they are deserving of respect, that’s the implied message of him coming.”