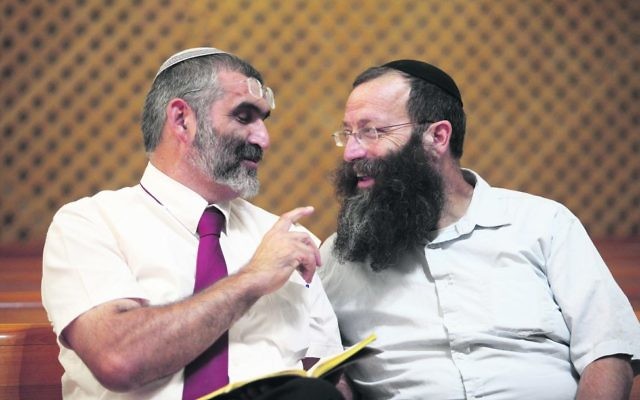 A NEW deal means that Kahanists will be in the coalition if Benjamin Netanyahu wins the upcoming election.

Followers of Rabbi Meir Kahane are now part of the party that is expected to be given control of Israel’s education system in the case of a Netanyahu victory. The politicians in question want many of Israel’s Arab citizens to be expelled.

Voices that normally stay out of Israeli politics are putting their scruples aside and speaking out against the elevation of Kahane’s followers in the Otzma Yehudit (Jewish Power) party three decades after his Kach party was banned for racism.

Rick Jacobs, president of the Union for Reform Judaism, said it was the equivalent of the Ku Klux Klan being embraced by the American establishment. In Israel a leading Orthodox rabbi said that the ideology being advanced by the Kahanists echoes the Nuremberg Laws.

Rabbi Benny Lau delivered a fiery sermon from his Jerusalem pulpit, arguing that while the Israeli public can sometimes be blase about political developments, this one oversteps a line. “Do not make any assumption that it’s ‘not so bad’,” he said. “It’s terrible, it’s a doctrine steeped in racism.”

Prime Minister Netanyahu brokered the deal because he thinks it will help the right wing to triumph over the centre and left. He is being accused of selling out Israel’s democratic image. Yair Lapid, one of Netanyahu’s main challengers, accused him of causing “great harm to Israel’s image in the world”.

The deal doesn’t directly involve Netanyahu’s Likud party. It is a unity deal between the mainstream Religious Zionist party, Jewish Home, and Jewish Power, a party of Meir Kahane’s disciples. The new alliance is called the Union of Right-Wing Parties.

Netanyahu’s interest is that he thinks the right wing is stronger when it’s more unified. He is believed to have offered the parties a set of incentives to join forces, including control of the education and housing ministries, and two seats on the security cabinet.

Kahane was a rabbi who moved from America to Israel in 1971, and years later entered politics. Kach was banned in 1988, and the reason recorded in government accounts is that it was “manifestly racist”. Jewish Power is seen as Kach’s successor.

The backlash against Jewish Home has been strong. Formerly the National Religious Party, it has been the main Modern Orthodox faction in Israelis for decades, and was once led by doves. But it has increasingly moved rightwards, and it voted overwhelmingly to team up with the Kahanists.

The latest development touches a particularly raw nerve in the US-Jewish establishment, which sees Kahane as America’s most extremist export to Israel. As well as AIPAC, the American Jewish Committee spoke out, calling the Kahanists’ views “reprehensible”.

It added, “They do not reflect the core values that are the very foundation of the State of Israel.”

Netanyahu hit back at critics, accusing “the left” of “hypocrisy and double standards” as it has cooperated with Arab parties in the past. Rafi Peretz, Jewish Home’s leader, said that he doesn’t agree with Jewish Power’s agenda and that it has a different and even “opposing” worldview to his.

But he defended the new arrangement as a “temporary technical agreement to increase the power of Jewish Home in the next government”.

Baruch Marzel, one of the Jewish Power candidates, responded to American critics, claiming that they “want to see the rise of the Israeli left” and see a government that is “giving weapons to the enemy”.