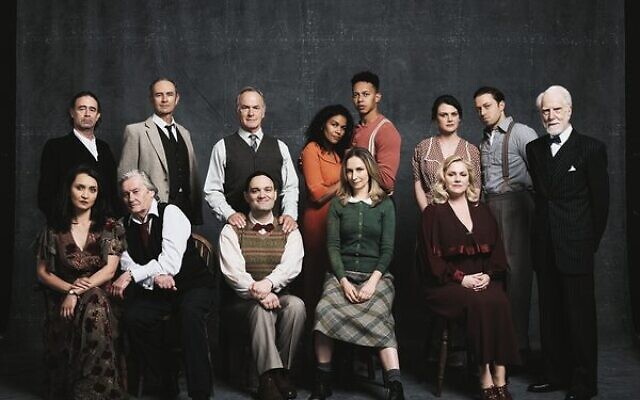 The cast of Girl from the North Country. Photo: Pierre Toussaint

The musical Girl From the North Country has been described as piercingly beautiful, theatrical storytelling.

The New York Times described it “as close as mortals come to heaven on earth” while The London Evening Standard referred to it as “beguiling, soulful and exquisitely heart-breaking”.

Which is why it’s so exciting to see the musical sensation come to Australia, opening in Sydney in February and Melbourne in April.

Life in Minnesota in 1934 was hard as America remained in the grip of the Great Depression. And it’s here where Girl From the North Country is set. At a guesthouse on the shores of Lake Superior, where every guest is at a turning point in their lives.

Peter Kowitz, one of Australia’s most prolific stage performers, plays Nick Laine, the proprietor of the guest house.

While the musical features songs by Bob Dylan, Kowitz insists the songs don’t tell the story, rather they help audiences understand a feeling.

“What’s unusual about Girl From the North Country is that it’s a really good dramatic play with music surrounding it. The songs don’t power the play forward as they would in a normal musical; these songs are about the internal feeling of what’s going on,” Kowitz explained.

“You could do the play without the music, and Conor McPherson is such a terrific playwright.”

Kowitz said that while you are aware of Dylan’s lyrics, because that’s what he concentrates on, during the musical you realise how beautiful the melodies are too.

It may be a strange choice by Kowitz, well known for his TV and stage roles, but when he explains what happened, it all makes sense.

“My first instinct was to say ‘no’,” said Kowitz. And then he was told he didn’t have to sing.

I just thought how fantastic would that be to have all the accoutrement of musical theatre, but without having to learn any songs?

Kowitz said what also drew him to the musical is the “themes of those great American plays”. He admits he’s not one to play kings and princes, and Girl from the North Country is about working-class America.

“My character’s wife is unwell, she’s got dementia, my son is a drunk and my adopted daughter is pregnant. And the bank wants to foreclose on the boarding house that was his grandfather’s,” Kowitz explained. “Life is falling apart.”

It’s a very moving play. When you combine the themes with Dylan’s magical music, Kowitz expects that audiences will get emotional, which is how he found himself during a rehearsal read for one of the final songs.

“[Lisa McCune] does this speech to me. She has dementia and she has a moment of beautiful sanity, and then she goes into Forever Young. I was sitting at the table, tears pouring from my eyes, trying to hide from the director because he said I wasn’t supposed to cry,” he laughed.

“I think it will be a release and will be very emotional for audiences.”

Girl From the North Country is at Theatre Royal, Sydney from January 5 and the Comedy Theatre, Melbourne from April 29. Bookings: northcountry.com.au