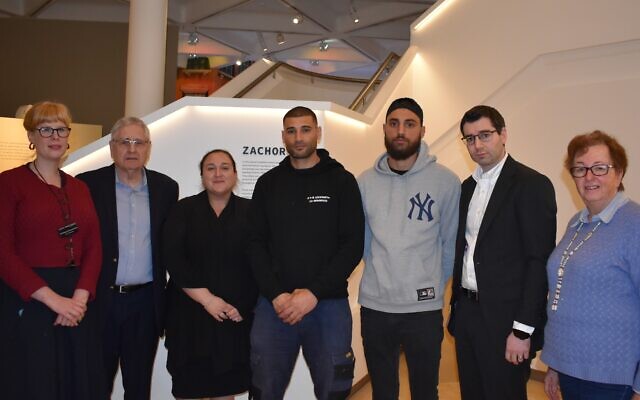 THE owner of a Bondi hardware store at the centre of an antisemitism row on social media last week has visited the Sydney Jewish Museum (SJM) with his brother, saying the pair were moved by the “humbling experience”.

Nahi Baki, who owns Budget Hardware & Locksmith on Glenayr Ave, Bondi Beach, issued an apology last week after it emerged that his brother Ryan posted a comment on social media saying “The Germans didn’t do enough damage” to Jews in the Holocaust.

The post sparked anger in the Jewish community, with several users on social media threatening to boycott the business. Others accepted the apology, saying they hoped the brothers “will use this as both a learning and teaching experience”. Another wrote, “Have been going to the hardware for over 20 years. Nahi is a hard working family man. He is not a racist.”

Stating that his brother’s employment with the business had been terminated and that Budget Hardware & Locksmith “does not support antisemitic statements, prejudice or discrimination”, Nahi Baki said, “I would like to express my sincerest apologies to the Jewish community for the hurt caused.”

NSW Jewish Board of Deputies (JBOD) CEO Darren Bark spoke with Nahi and invited him and his brother to visit the Sydney Jewish Museum, which they accepted.

On Monday, the brothers toured the museum and met with Elanit Mitry and Mary Guth, the daughters of Holocaust survivors.

Speaking to The AJN, Nahi said the experience had “brought the devastation of the Holocaust to the forefront of our conscience”.

“Moving forward I would hope that our society will [learn], as we have learnt from this humbling experience, that the Holocaust impacted more than just the six million Jewish people that lost their lives, but even to this day it impacts the families as well, including the family of our dear friend Elanit Mitry who accompanied us to the museum.”

Stating, “I have always felt privileged to work in the eastern suburbs immersed in such a culture-filled group of people,” Nahi added, “I’m looking forward to working with the Jewish community to ensure the message of ‘never again’ is not forgotten.

“Our deepest sympathy goes out to all the Jewish community.”

Nahi thanked JBOD CEO Darren Bark for the invitation, as well as the SJM’s head of education Rebecca Kummerfeld, its CEO Norman Seligman and JBOD’s head of operations Mary Guth.

“The staff do an extremely important job so well,” he said.

Bark told The AJN, “Following their experience at Sydney Jewish Museum, Ryan and Nahi want to become advocates of the teachings and messages they saw, heard and read during their visit – to fight against antisemitism in the broader NSW community.

“Education is key to building respect, understanding and acceptance. The NSW Jewish Board of Deputies is developing additional strategies to support our community navigate the landscape of heightened antisemitism.”