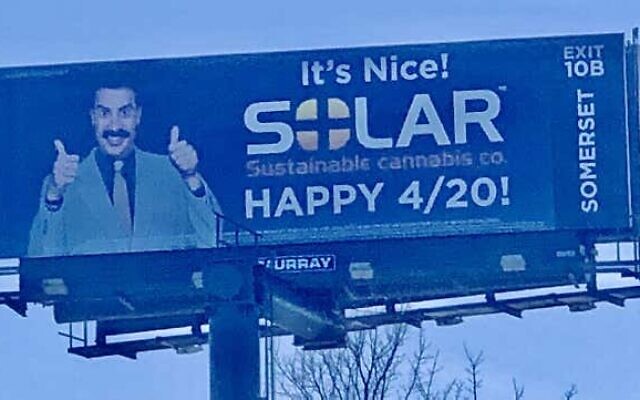 SACHA Baron Cohen is suing a US cannabis company for using his famous Borat character on a billboard.

According to court documents filed last Monday in the US District Court (Massachusetts), the actor is seeking at least $US 9 million (AUD $12 million) from Solar Therapeutics for wilful copyright infringement and false advertising after the billboard featured Borat in his famous thumbs-up pose along with the phrase “it’s nice”.

“Without permission of any kind, the defendants have deliberately featured the portrait, picture, image, likeness and persona of Mr Baron Cohen and his ‘Borat’ movie character in a commercial billboard,” the documents state.

“The defendants not only used Mr Baron Cohen’s image, portrait and likeness on their billboard, but they also used the character Borat’s physical pose, characterisations, style and gesture.”

The claim says the defendants have “falsely conveyed” to the public that Baron Cohen “has endorsed their products and is affiliated with heir business”.

“To the contrary, Mr Baron Cohen has never used cannabis in his life,” the documents state.

“Cannabis remains a controversial product that Mr Baron Cohen has no interest in promoting, endorsing or advertising.”

Baron Cohen’s attorney sent a cease-and-desist letter to Solar Therapeutics in April this year. Three days later, they told his attorney the billboard had been taken down.